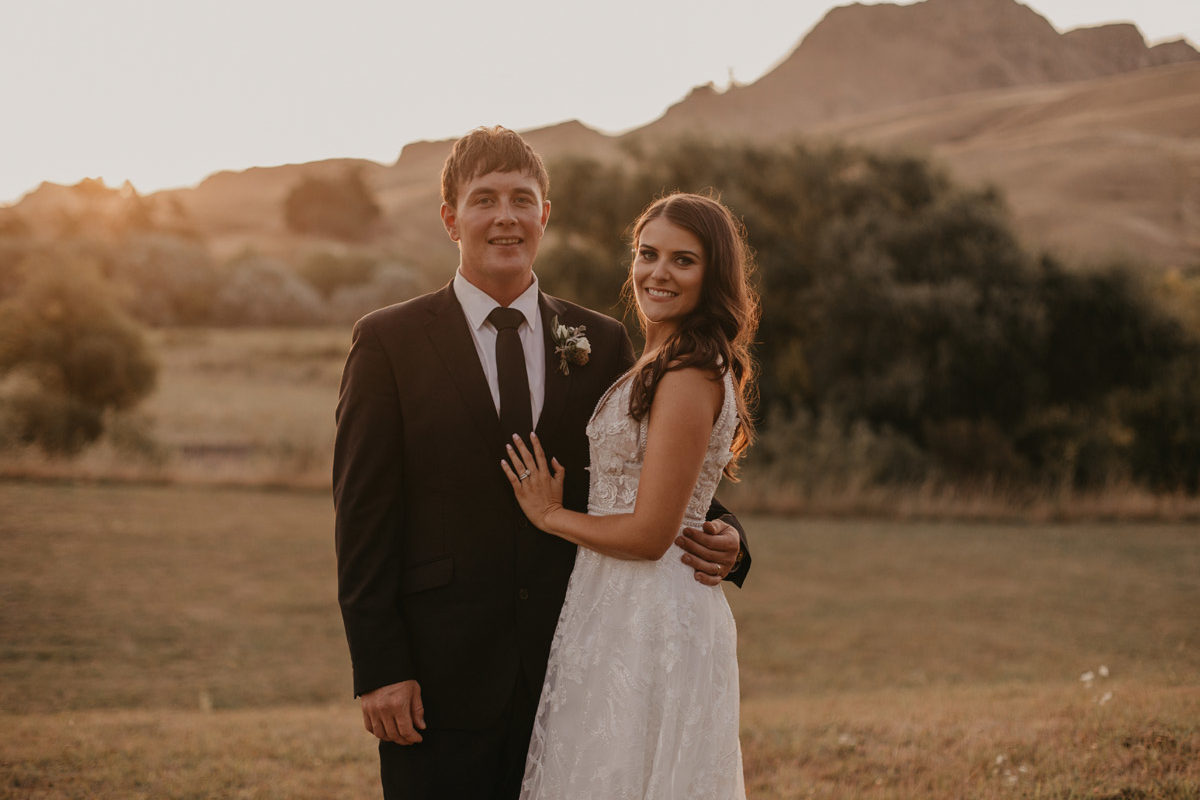 Dan and I met 10 years ago at a friend’s party during our last year of school. We went to different boarding schools in Hawke’s Bay and instantly clicked, hanging out for a while before ‘officially’ dating. At the end of the year, we separated as we were both headed to the UK for our gap years. In October 2011, we met up in London and realised how much we missed each other. We started going out again on our return to New Zealand that December. I moved to Taupo to be with him and it was the best decision – we lived with his amazing parents for a while before renting, then buying our own house. Dan stepped up in his parents’ construction company when his dad passed away in 2016 and has made us all proud. We have since welcomed our beautiful border collie, Tilly, into the family and become aunt and uncle to some gorgeous nephews.

Dan proposed in Bali in 2018, much to my surprise! It was an absolute dream. As we headed to dinner following cocktails at the resort’s bar, Dan said he needed to stop by our villa for a second. He opened the gate to reveal the path lined with candles and rose petals which continued to the pool area. It was there that, surrounded by lanterns, he got down on one knee! The surprises continued with champagne and a three-course meal at our villa with a live singer. It was like something out of a fairy tale.

We chose to get married in Havelock North, as well as being where we went to high school with all of our best friends, it’s where we met and began our journey. Dan and I even held our ceremony at my old boarding school, Woodford House. I saw our reception venue, The River House, on social media and fell in love with it after visiting. We chose to have a summer wedding as the weather is normally more stable in Hawkes Bay in the warmer months. A warm, sunny day sounded ideal, especially as we were having an outdoor reception – We didn’t want it to be cold for anyone and we count our lucky stars as the day was sunny with no wind and not a cloud in the sky!

Our florist was my beautiful, talented God Mum Annie who owns Honeysuckle Flowers in Auckland. I had always dreamed of having just whites and greenery in my bouquet and centrepieces, so we stuck with silver dollar eucalyptus, olive leaves, white roses, white lisianthus and bunny tail grass for a simple and elegant look. The flowers tied in so well – we didn’t want too much ‘colour’ at the reception, and the whites and greens went beautifully with the gold side tables and couches in white linen and soft pink velvet that we had rented. We are both huge romantics, so of course, a tonne of candles, tealights and fairy lights were also required!

I had always dreamed that my wedding dress would be elegant, timeless and easy to dance in. Though I tried on over 30 dresses in three shops over two days, I had already fallen in love with a dress from the first shop. I knew as soon as I tried it on that it was ‘the one’ – I could picture myself marrying Dan in it! It was the dress of my childhood dreams; ivory, with a low back and V-neck and three layers of lace. The A-line gown had tiny pearls down each strap and quite a long train. It was actually super comfortable for the whole day! I cried a lot when I wore it – it was everything I had envisioned and more. My lace veil was borrowed from my God Mum. It was made in Italy around 140 years ago and had been worn by four generations!

After the ceremony, we served canapes including arancini balls, sliders and satay chicken skewers. At the reception, there was no seating plan as we wanted a more casual buffet dinner. The buffet included beef rump, stuffed pork with crackling, salads, pasta, seafood salad, roast vegetables and cauliflower with cheese sauce. It was all delicious and the leftovers kept us going for four days afterwards! Dessert was our wedding cake made by Harriet, a close family friend who used to be a chef and baker. She made an incredible four-layer Madeira cake with white icing which was decorated with greenery.

Being pronounced husband and wife was the best feeling ever! Another standout moment was looking down on the reception venue as we had sunset photos taken – It felt so surreal and magical knowing that everyone we loved was there to celebrate with us. Our whole wedding had such a relaxed atmosphere and was so full of love. It was magical and dreamy, perfect and unforgettable.