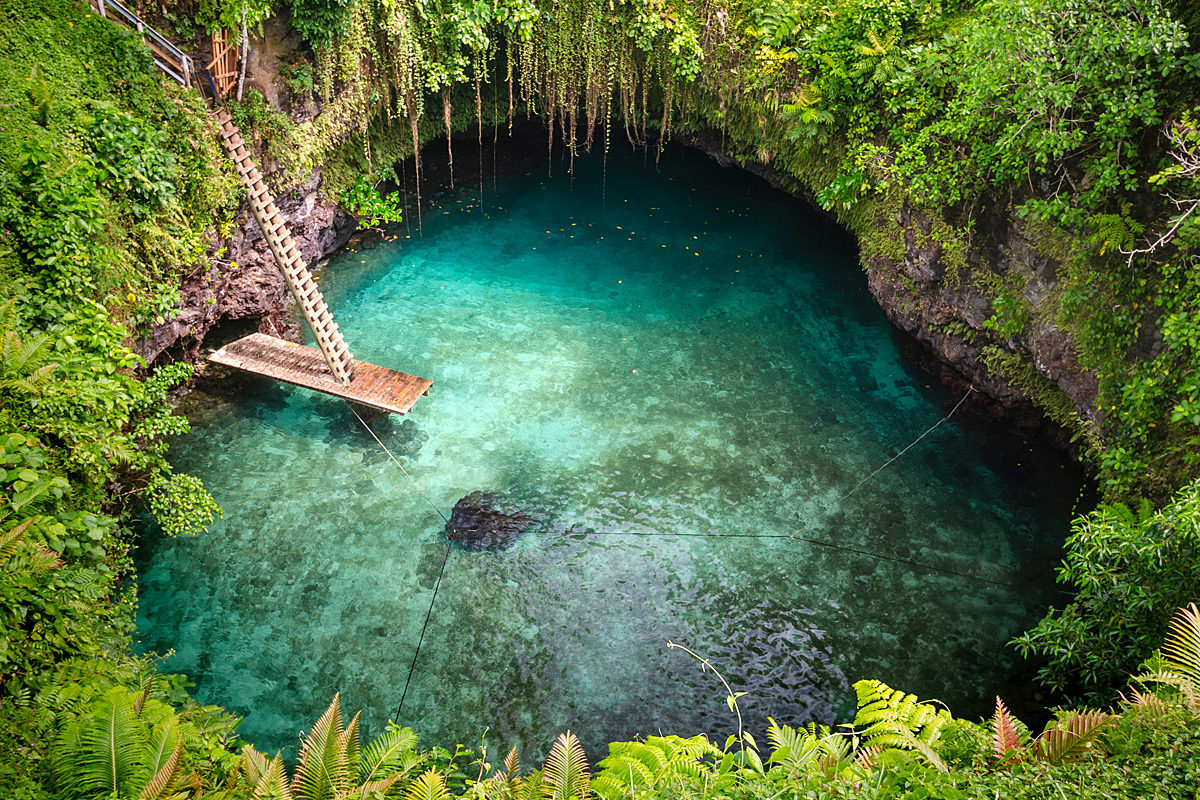 To Sua Ocean Trench
This is Samoa’s number one absolute must-do. Situated on the south coast of Upolu, it’s a geographical marvel that has to be seen to be believed. The world-famous natural formation creates a spectacular 30-metre deep swimming hole (To Sua literally means ‘Giant Swimming Hole’). The hole was formed by a cave-in of an ancient lava tube system that connects to the ocean, and thousands of years of erosion have made it into the beautiful spot it is now. It is the most photographable spot in Samoa – take your pics from above then climb down the steep ladder to a long platform and jump in for a refreshing one-of-a-kind swim. Take a snorkel for a look around and when you’ve swum enough there are beautiful coastal views, fales for relaxing in, a restaurant for refreshments and a lava field with mini pools and blowholes. Make all your friends at home jealous with your visit to To Sua – do not miss it!

Waterfalls
Waterfalls are a matter of pride in beautiful Samoa – we do them better than most! Here are five of the best . . . On Upolu visit Papapapaitai Waterfalls, Sopo’aga Falls and Togitogiga. The Papapapaitai viewing spot sits just a few steps off the Cross Island Rd and the impressively tall fall is a sight to behold. The Sopo’aga viewpoint is similarly easy to access off the Main South Coast Rd and is probably the prettiest waterfall – it’s majestic in its dense jungle scene. There are two smaller waterfalls at Togitogiga which create a large swimming hole – there’s plenty of space to swim around and underneath the waterfalls. It’s a magical place for a cool dip and there’s a grassy picnic area so pack your lunch and stay for half the day. Also on Upolu, Papase’ea sliding rocks is a waterfall with a difference . . . Have a blast sliding down these naturally formed rock slides, worn smooth(ish) by thousands of years of running water. There’s a slide for kids and one for adults, as long as there’s enough water coming down the falls. Pay your entry and find your inner slider! Over on Savai’i is beautiful Afu Aau – a spectacular waterfall plunging into a deep swimming hole. It’s a short 10 minute walk to the falls for a delicious cool swim.

Stay in a fale
Staying in a fale is a special way to experience fa’a Samoa – the Samoan way of life – as Samoans have for thousands of years. This relaxed and laid-back style of accommodation gets you as close to the ocean as is possible and means the soundtrack to your sleep is the hush of the ocean . . . Most fales have a domed, thatched roof held up with wooden poles, no permanent walls with rolldown blinds instead. A night in a fale is an incredibly cheap way to stay in some of the most beautiful spots on earth that you’d usually pay top rates for at a resort and dinner and breakfast are often included in the price. Some popular fale accommodation spots are at Lalomanu Beach and Salamamu on Upolu, and on the beautiful north coast of Savai’i.

Blowholes
These impressive blowholes are a real treat to see in real life. Situated in the village of Taga on south-west Savai’i the blowholes propel a roaring jet of water hundreds of feet up into the air. The blowholes have been created by lava flows making a series of tubes connecting a flat clifftop of lava rock with the ocean below. Waves break against the lower end of the tubes sending water at high pressure up through the tubes making fountains that spray every few seconds. Locals throw coconuts into the holes for visitors and these are blasted into the air for an impressive added extra!

The Long and Short of It

By The EditorDecember 27, 2020
Destinations

Take It Easy in Raro