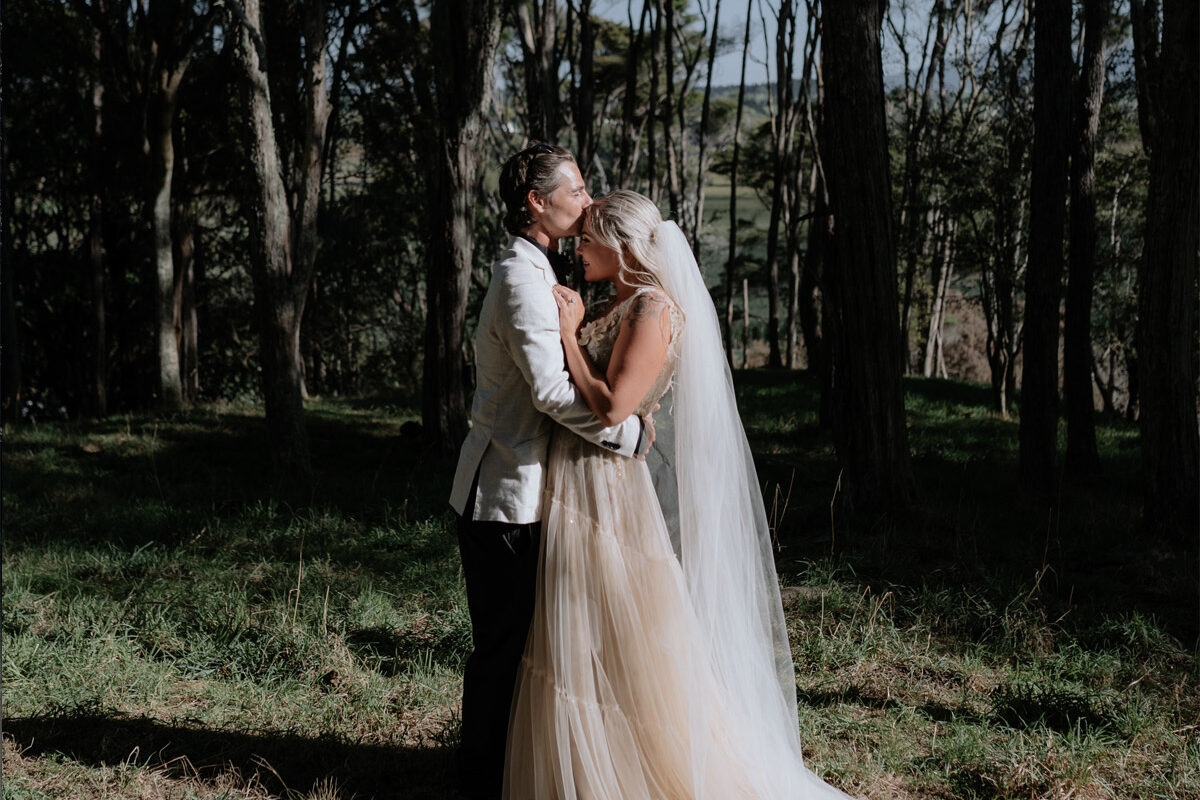 Oliver and I met through mutual friends. I really wasn’t interested at first! A few house parties later and well, the rest is history. We had a surprise pregnancy at the start of our relationship. My body doesn’t like being pregnant and I spent most of it in hospital or in bed, counting how many times I felt a kick. Oliver was the rock I never thought I’d find: sitting with me for hours, helping me cope and all the while smiling, listening and holding my hand. We managed a stressful situation as a team.

We fell in love quickly and realized we wanted to give our family a go. Neither of us was looking for a relationship, let alone a baby, but we found ourselves head over heels in love. Three years later, we have two kids, two dogs and we’re married. I am still in awe at where we’re at now.

The proposal was a beautiful failure! Oliver (Oli) tried to give our two-year-old daughter Liffey the ring to bring to me but she proceeded to have a meltdown. I had no idea what was happening. Once we pried the box out of her grasp, Oli placed the ring on my finger and I stood there for ten minutes. He said; “so is that a yes?” to which I replied; “you never actually asked!” We were engaged for eight months.

For our wedding, we wanted a tipi as we love the look and feel of them. Luckily, we were able to use a close family friend’s farm as a venue, outside of Dinsdale. I grew up on a farm. Also, we didn’t have a time limit on when we had to leave so friends camped out with us, which was amazing. We had 60 guests. It was a magical day. The next morning, we had a BBQ brunch and everyone helped us to pack down. Our wedding was very casual. Some guests were in jandals and some in suits! Everyone being involved from the start to the end made for a fun, easy-going day.

We chose autumn for the marriage as we didn’t want high summer and spring weather is too unpredictable, but this gave us two weeks to plan! We made sure to provide blankets and a fire to keep guests warm and were lucky it didn’t rain.

I chose a theme of black and gothic. I wanted dark and dramatic flowers, something a little different. The drama of the different colours and textures really stood out against my dress and I loved that contrast. I had never been that girl who dreams of her perfect wedding but I had always wanted a gold dress, so that was top of my list.

My Vinka Design dress was made from beautiful lace and we added more lace and 3D flowers that my mother spent many hours painting and sewing to create that gold look. With a sheer back, it was everything I wanted! We added an entire overskirt made of tulle in champagne colour. I was able to take off my skirt later to make it easier to dance. It was amazing. I had gold sandal shoes made from pleated fabric and I kept it simple with a couple of hair clips, a pair of earrings and a veil that hit the ground. Oliver chose an oatmeal-coloured linen blazer with a black shirt and pants. He added a maroon tie and pocket square.

We went for a banquet-style dinner with beef sirloin and tuna steak (that everyone raved about), along with salads and a grazing table. We didn’t have a cake. My Dad John made a speech and told Oliver he was “as chill as a sloth”. He also told us how proud he was of me and of our family.

The photoshoot was a chance to get away from it all and just hang out. We also had to walk up a very steep hill, which was entertaining for all our guests. We created our own playlist of 1930s and 1970s party music: lots of Elvis and Bobby Darren.

For our honeymoon, we went camping to Ruapuke, without the kids and we plan to go overseas when the world opens up!

My advice would be to do what feels right. You don’t have to have bridesmaids or groomsmen or a seating plan. All our feedback was nothing short of amazing.