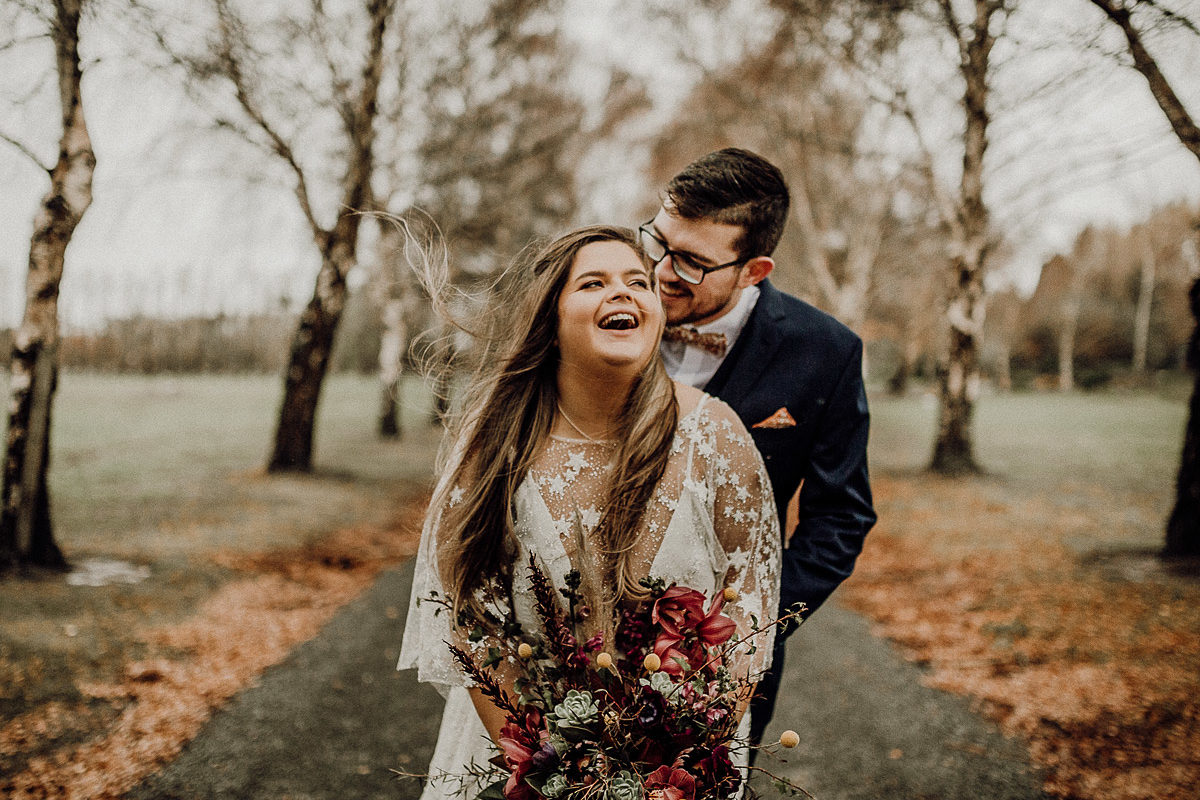 Matt and I met through a mutual friend in 2016. He noticed the ‘RW’ tattoo on my wrist and asked if it stood for Robbie Williams. I was, and still very much am, a huge fan. Born in the UK, Matt naturally is as well and told me that his dad was the biggest Robbie fan in the world – he was obviously proven wrong!

Two years later we’d bought a house and Matt proposed at the end of the year at the Distinction Hotel in Dunedin with bubbles and flowers. He had booked dinner at my favourite restaurant in town, but we ordered Uber Eats and watched a movie instead – we had to make good use of the fancy hotel, right? We decided to get married before relocating to Canada for a year. Five months to plan a wedding was not easy, especially as I decided to make 1000 white paper cranes for the chandelier centrepiece, but we loved every minute of it!

Choosing a wedding dress was difficult for me – I’m not a girly girl, so I struggled to find something that I felt like me in. Around 90 percent of my wedding purchases were made on Etsy and it was where I stumbled across Boom Blush. It was important to me to support a New Zealand designer. I fell in love with my dress instantly – it looked so magical and reminded me of dresses in Harry Potter!

We chose to hold our wedding on the first day of winter. We were hoping to still catch some sun, though we didn’t in the end. The venue, Lacebark in Kaiapoi, was chosen as it was close to Matt’s family. I’m from Dunedin, so people would have had to travel either way. I fell in love with Lacebark’s outdoor garden but, with our wedding ending up being on one of the wettest days in Canterbury’s history, everything was moved indoors.

Matt and I said from the start that we wanted the whole day to be ‘us’; not too serious with lots of laughs. I think we achieved our goal. Reading our vows to each other at the ceremony resulted in lots of laughter and even a couple of tears (Matt’s, not mine). The standout moment for me was surprising Matt with two of his friends performing his favourite song ‘Time of Your Life’ by Green Day as I walked down the aisle.

I couldn’t recommend our florist Bourbon Rose enough. They were amazing in helping me come up with a vision, spent hours creating the arch and hanging foliage from the ceiling and saved the day when we had to move everything inside. We incorporated everything we love into the day, like our main pop of colour, orange. There were a few British touches like a red post box for our cards, a double decker bus and a table of tea and scones. We also had a ‘rave cave’ with glow sticks, strobe lights and a bubble machine which was awesome!

Having our photos taken was interesting due to the rain. We ended up on the road outside Lacebark with loads of umbrellas and denim jackets to try to keep us warm! Tamara the photographer was an absolute star and crouched in puddles to get the right shot!

The Social Platter Co. created three amazing platters for us to eat throughout the day; a huge grazing one for after the ceremony, an Asian fusion entrée selection with bao buns, wontons and mini beef burgers, and a shared platter with pork belly, chicken thighs, lamb and ribs for the main. Our cake was three tiers – carrot, white chocolate raspberry and triple chocolate. It looked amazing decorated in our flowers, not to mention the taste!

The reception was full of laughter, just like the ceremony. The speeches from my dad and maid of honour had the majority of the room crying and then it was laugh after laugh as the best man, Matt’s dad, then Matt himself spoke. We also played ‘the shoe game’ which was heaps of fun! We just laughed a lot and had a good time with our friends and family. Our first dance would have to have been my favourite part of the day! We had had lessons once a week for four months and danced to a mashup of Robbie songs. The mashup ended with ‘Angels’ at which point everyone was told to get up to dance and sing at the top of their lungs. Never have I felt so happy!