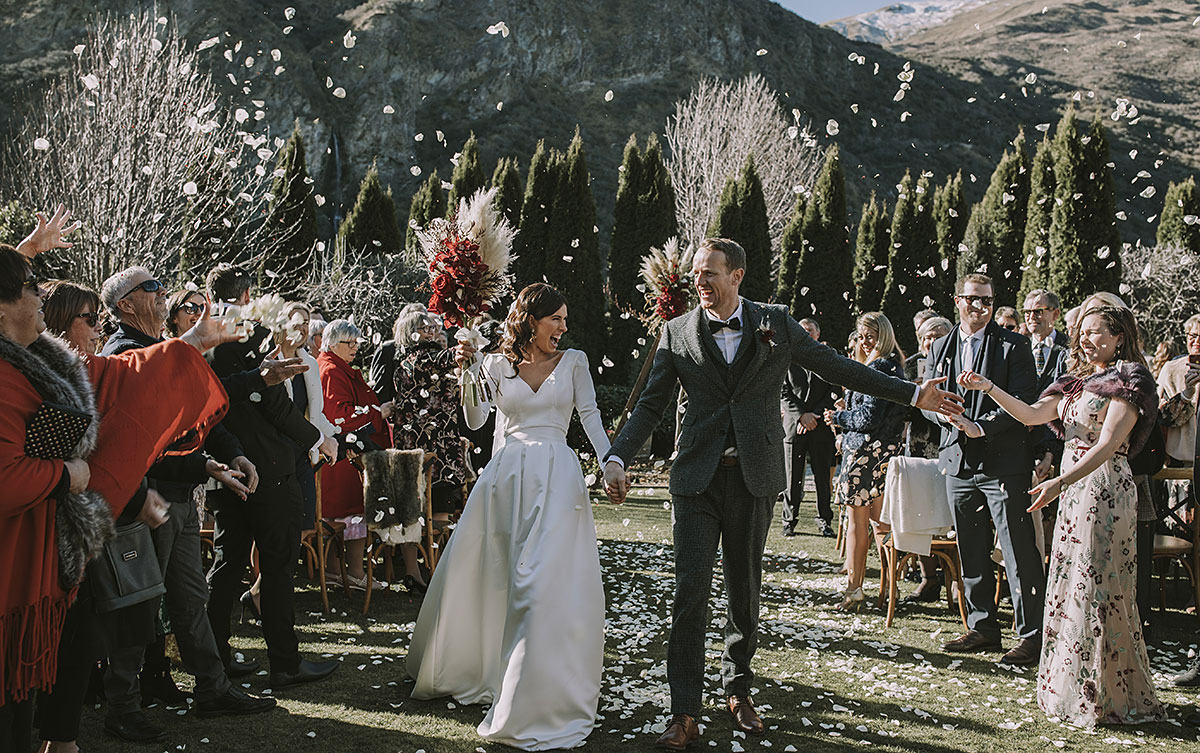 After spending the last six years travelling and adventuring together all over the world, you’d think it would have been tough to choose a location for our wedding. I’m from Sydney and James is from Auckland, so we figured if one lot of our friends and family had to travel, we should go for a destination wedding and have everyone venture there. Queenstown was an obvious choice. We both love the mountains and have spent as much time in them as possible since we moved to New Zealand, and the idea of a winter wedding was too good to pass up. 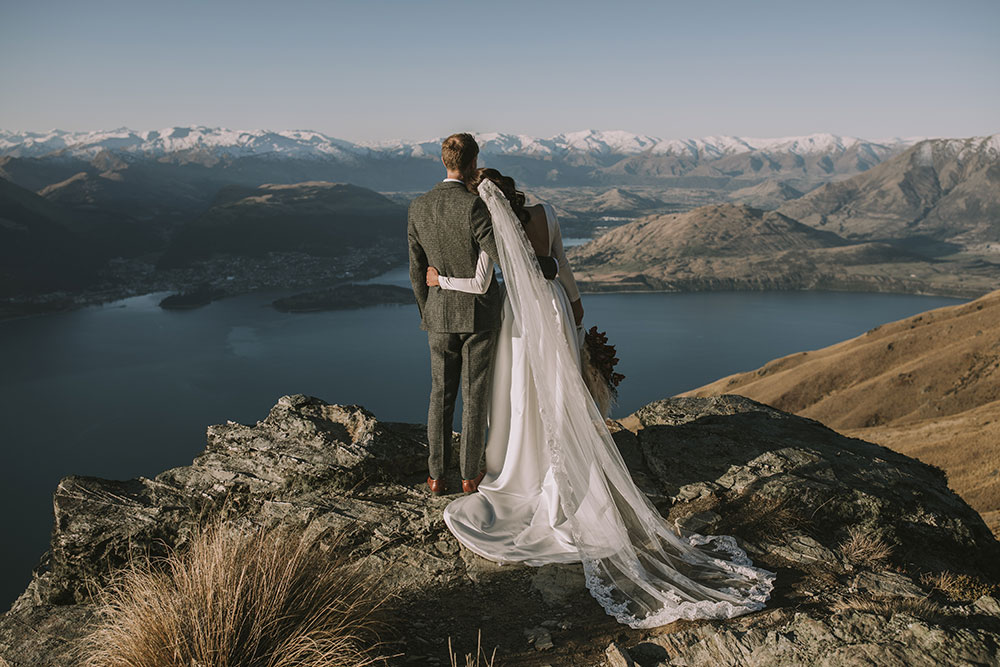 We’re both into vintage, so the winter setting really did lend itself to our style. We weren’t interested in the whites and pinks you see at so many weddings. Instead we went with burgundy and brass as the colour scheme. Gypsy West from The Vase in Queenstown did an amazing job helping us choose flowers that contrasted with the rocky Central Otago backdrop. We used cymbidium orchids, roses and pampas grass with a few little dried delights thrown in. They really helped us capture the moody, whimsical, dark and wintery vibe we were after.

In keeping with our warm winter wedding, James wore a Harris Tweed suit from the UK, bought online and tailored here in New Zealand, while the groomsmen’s tweed suits were custom made by StudioSuits. The kiwi boys weren’t too impressed that I’d chosen socks with kangaroos on them, but I felt they needed an Aussie touch, even if it was hidden in their shoes. 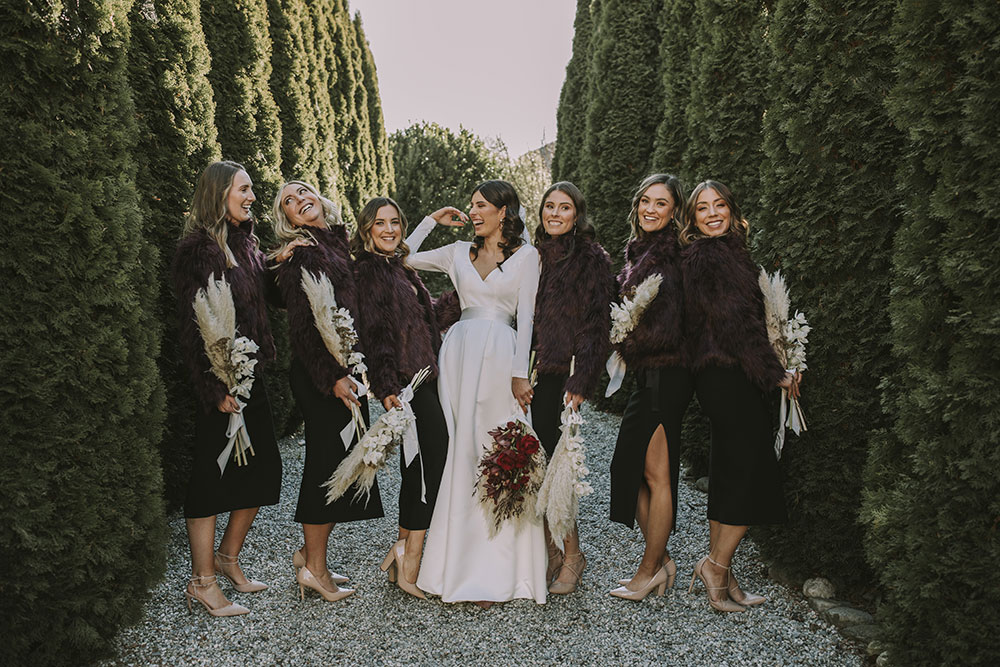 For my gown, I was after a formal look that showed off my décolletage and back while keeping that wintery feel. I couldn’t find anything I liked after looking around bridal boutiques, so I decided to design it myself. I met with the amazing Trish Peng and the process was so fun. The final gown had a backless satin underdress, long-sleeved with a side split. It was a fitted style with a V-neck to accentuate my décolletage. The overskirt was thick and textured with fabric-covered buttons on the belted skirt and sleeves. The veil had lace applique on the edges and running up the back. Jewellery was kept relatively simple, I wore Ruby & Sage petal earrings and my grandmother’s 120-year-old sapphire and diamond ring. 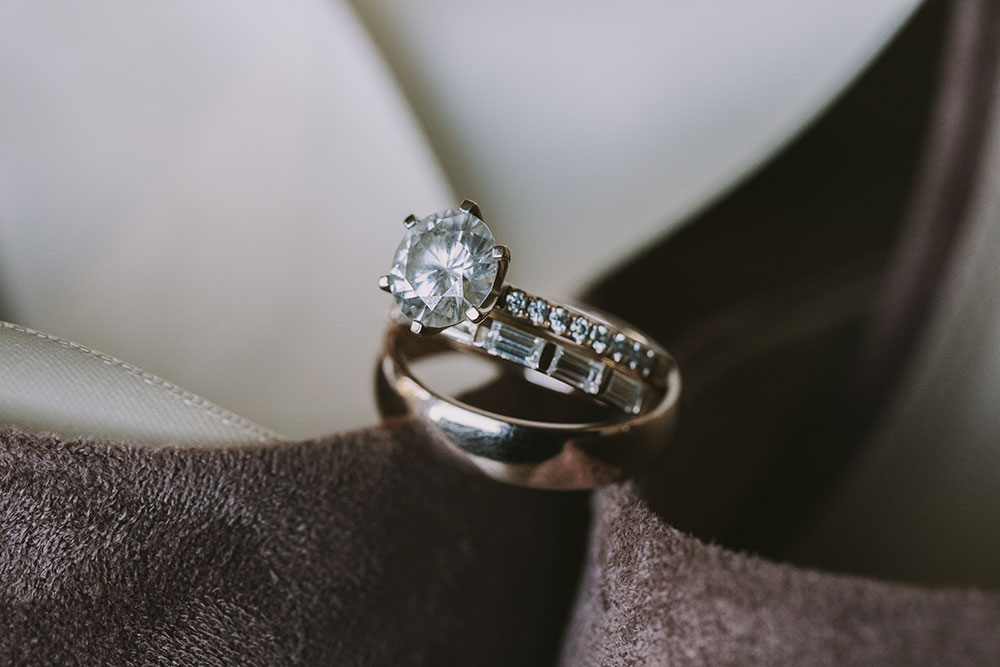 From the first moment to the last, the day itself was incredible. The girls and I all had a sleepover and when I woke James had left a present for me. He’d kept the piece of paper I’d written my number on for him on the night we met six years ago. He’d had it framed with a photo of us. I was in tears before 7AM.

As a bit of a surprise, we’d not told our guests where our wedding was. We’d arranged transport to pick them up to bring them to the venue. We chose Winehouse because we wanted to have an outdoor ceremony in the garden with that beautiful Central Otago backdrop. We knew with a winter wedding that we were rolling the dice, so the indoors option at Winehouse was perfect for us should we need it. We didn’t and it ended up being an exceptionally sunny winter’s day.

The ceremony was true to us – we even played paper, scissors, rock to decide who would say their vows first. After the ceremony, we were whisked up to Cecil Peak in a helicopter for photos. Having that time together felt incredible.

Popping champagne on the edge of the world and reflecting, just for a moment, on this amazing day – and the fact we’d just gotten married!

We returned for canapes and cocktail hour with mulled wine and hot buttered rum before sitting down to family-style dining with shared plates under the lantern-lit marquee. We’d specifically chosen all the food ourselves and the team at In2food does everything so well. The only advice I’d give is to eat it all on the day. Food tastes so much better on your wedding day.

Not quite so traditionally, we had espresso martinis after dinner and opted for a doughnut tower (by the very talented Balls and Bangles) instead of a cake. We both love doughnuts.

They were iced in burgundy, brass and pastel colours to match our theme and they were delicious. While we’d chosen all the songs to get us through the ceremony and the earlier parts of the evening, Sam from the Winehouse helped us pick a local band, The Flavour, to get everyone up and dancing later on. And they certainly did that! Everyone, young and old, was on the dance floor and their saxophone player really stole the show.

Although we really couldn’t have asked for more than that, we got to spend a week in Queenstown with all of these wonderful people; snowboarding, eating, drinking and enjoying everything the region has to offer. Our honeymoon was more of a ‘mateymoon’. I’d love to do it all again but, if we did, I guess it wouldn’t be so special.