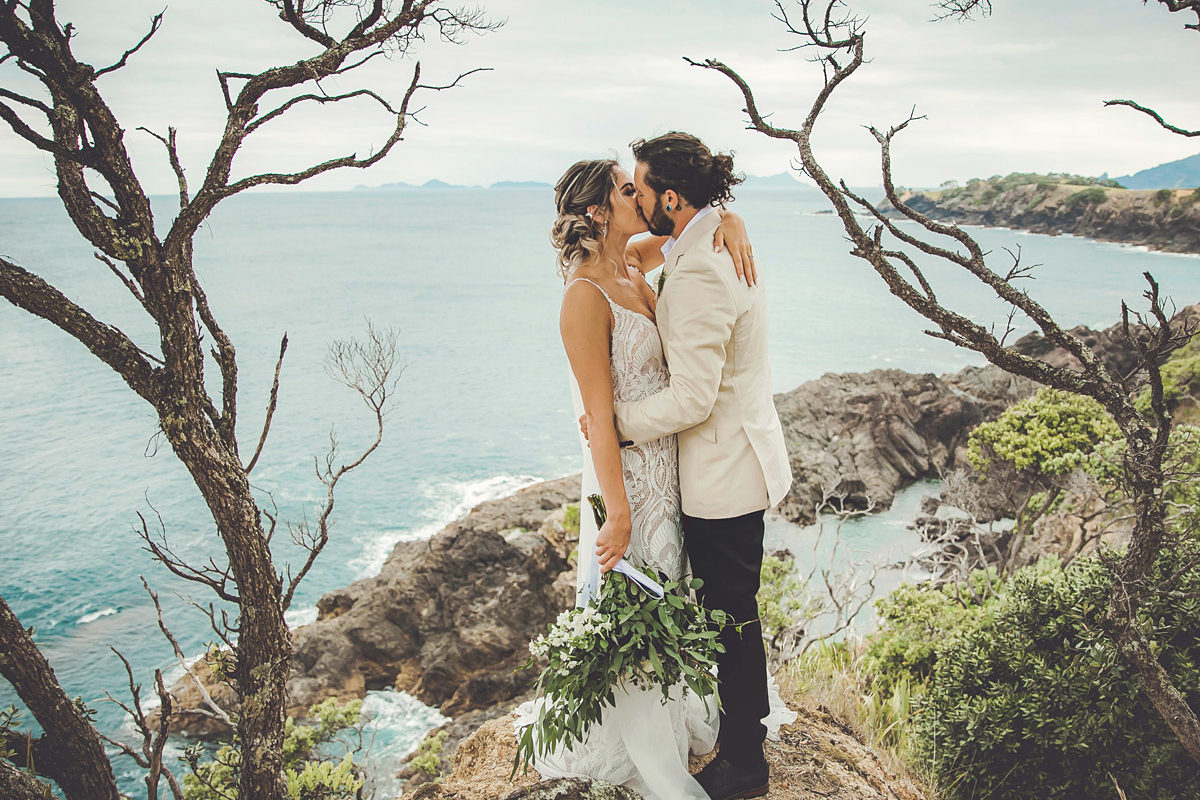 I was fresh from Canada and had only been in New Zealand for five days when Joel and I met for the first time. I was working the door at a bar in Whangarei and he initially pushed past me without paying – I thought he was a jerk! Later that night he bought me a drink and we found out that we had just about everything in common. We didn’t leave each other’s side for the next two weeks and moved in together after three. Joel and I spent the next two months exploring New Zealand together – hiking, travelling to every beach in a three-hour radius and road tripping every weekend. Joel always says that after the first month he knew we’d be together forever.

We’d been together for less than six months when we decided to pick up and move down to Queenstown for snowboarding season. On my 21st birthday, Joel surprised me with a trip to Milford Sound, hiring a super launch just for us. We toured the area on the boat, adventured around in kayaks, ate a three-course dinner and drank wine on the top deck under the stars. When the boat pulled close to a waterfall, Joel proposed to me.

Joel and I wanted to get married in Whangarei as we adore where we live! He grew up here and I have fallen in love with its beauty – it’s our home. We were lucky to have so many venues to choose from in the area plus Joel’s mother, a wedding celebrant, who had a good idea of some prime locations. She introduced us to our reception space which was occasionally hired out to locals. For the ceremony we drove around the coast looking for the most beautiful spot and stumbled onto the clifftop we eventually married on. It is visually stunning; one of the most beautiful hidden places in our area.

We matched our stationery to the natural boho vibe we hoped to have for the ceremony. Joel designed and made our wedding book with leather from his tool belt and had it custom engraved. We made signature drinks named after our two cats, Feijoa and Bloot. My bridesmaid Brenna and I handmade the bridesmaids’ bouquets and the boutonnieres from flowering tea tree and silver fern. Our home is surrounded by Kanuka tea trees and we were blown away by how beautiful they were while in bloom, so had to incorporate them. The main flower in my bouquet were dried proteas. I loved how the dried elements added to the elegant boho theme, while the draping fresh flowers made it more dramatic. The greens, blues and whites of the flowers tied into our colour scheme. My bouquet also had olive tree leaves through it and to get to our ceremony, the guests had to walk through an olive grove.

I wanted a very elegant boho-chic look for my gown. We searched all over Auckland and Whangarei to find ‘the one’. I knew I wanted something with lace and not a lot of extra fluff. The dramatic peacock lace of the Zavana Bridal gown was so different from anything I had ever seen. It was such an interesting play on classic lace that made it very fresh and chic. It had a plunging back and thin lace straps. There was also a detachable tulle skirt that trailed behind, for more of a soft fairy tale look. I accessorised with diamond drop earrings, a crystal and white gold hairpiece, a cathedral tulle veil and silver and crystal barefoot sandals.

At the reception, we served an upscale buffet. Our main dishes were beef porterhouse with red wine jus, pork tenderloin with vanilla apple sauce and roast chicken with cranberry apple stuffing. For our sides, we had duck fat roast potatoes, feta penne and garlic bread. We also had seafood mornay with freshly caught scallops, and a selection of salads. The mornay and porterhouse were the standout favourites. Dinner was followed by a dessert bar with cookies, doughnuts, cakes, vegan slices and our wedding cake. It was a two-tiered chocolate mud cake with buttercream icing made by Joel’s sister who was also one of my bridesmaids. I chose a naked cake with silver detailing for its simplicity, elegance and beauty. Joel says his most memorable moment of the day was when I was walking down the aisle to Jimi Hendrix – everything we had hoped for, planned and rehearsed was coming together in that moment. He says he couldn’t believe the girl walking down the aisle would be his wife in a few short minutes. For me, it was our first dance under the pink sky with fairy lights twinkling in the trees. It was unbelievably romantic and one of the happiest moments of my life.

We hope our guests remember the natural beauty of the place we’ve chosen as our home and enjoyed the undeniable love and true happiness in the air that day. Joel and I are so glad we chose to have our wedding in New Zealand and that we did so many DIY projects ourselves. Looking back on it now, all of the special touches made the day so much more memorable. Our wedding day was perfect.

By The EditorMarch 8, 2021
Real Weddings