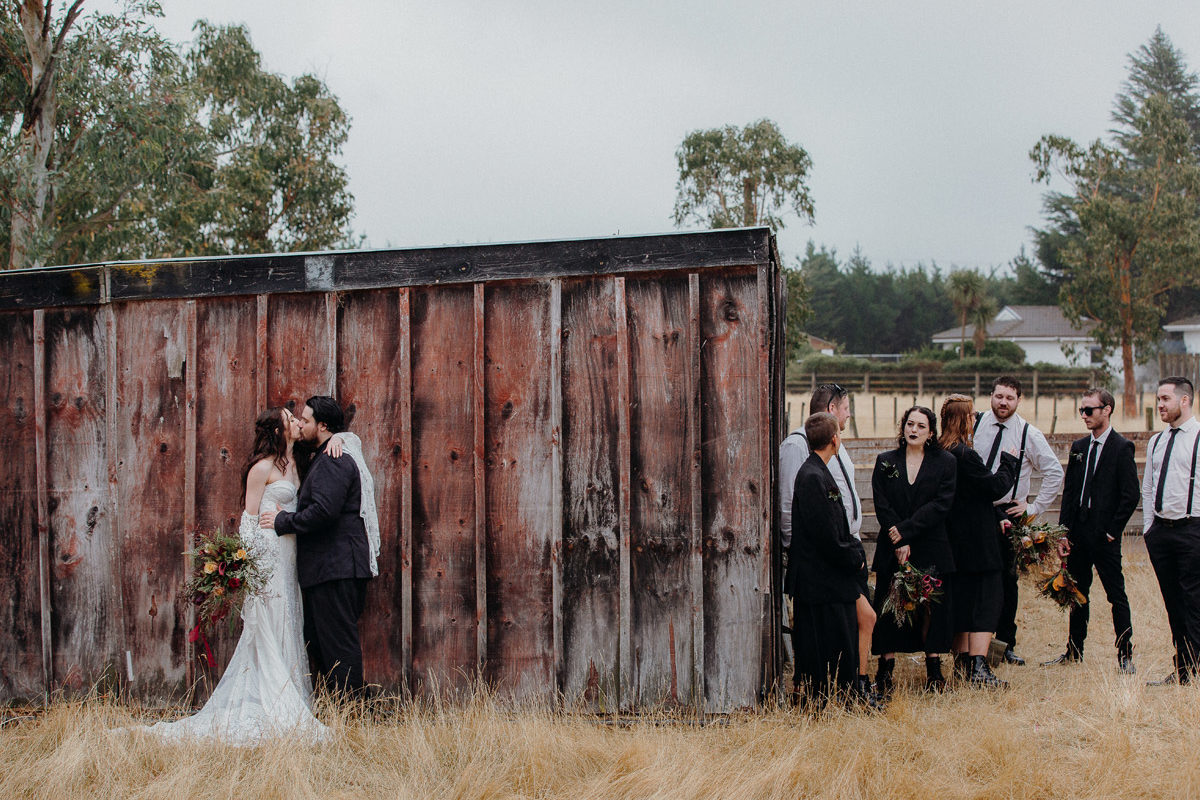 Jack and I were set up by one of my bridesmaids when we were 16 years old. Jack was in a heavy metal band. We used to go for walks and talk for hours. From the moment I met Jack, I trusted him. We knew we’d be together forever. Eight years later, we got engaged.

I found our venue, Darjon Vineyard, online. Jack said he would “marry me anywhere” so it was up to me to decide! I chose late summer because I wanted good weather and I. loved all the overgrown, dry grass. My colour scheme was warm and earthy with brown, orange and green accents plus dark red for love and romance.

Jack and I wanted a day that represented ‘us’ with a handfasting ceremony. We chose a moody and romantic pagan-style theme with a boho style and introduced some witchy elements such as a smudge stick (sage), ribbon wands and crystals. My mother made us a macramé hanging that we attached to our wedding arch; we also attached a faux cow skull. I made our handfasting chords and Jack and I wrote our own affirmations. We gave our guests ribbon wands instead of confetti. I chose a cascading bouquet that looked wild and romantic with a pop of yellow roses. It looked amazing! We hired a vintage London cab to take me to the venue.

We went for a buffet-style menu with spit roast meats, vegan lasagne and seasonal salads. Our cake was a three-layered naked wedding cake with buttercream icing and caramel dripping with gold foils and florals. We also had a vegan cheesecake.

One of our favourite memories was sitting in our special Mr & Mrs peacock cane chairs with the bridal party standing around us. We popped champagne and the photos were awesome. The best part was how our photographer got us to fake laugh during the family shots! My Dad would do this ridiculously loud guffaw and everyone burst out laughing for real. That helped us shake off the nerves.

We saved money by making our own playlists. Jack works in the music industry so we called in some favours for a great sound system to play our tunes loud!

My bridal look was boho and gypsy. I wanted a lace dress and found the perfect strapless lace gown with a structured bodice from an NZ-based designer. It was draped from the hip with detached sleeves. I kept my accessories simple.

I loved the idea of my bridal party wearing black. My bridesmaids wore Dr Martin books and gold jewellery. It gave our day some badass energy. Our four nieces were flower girls and they wore black tulle dresses, mustard sweaters, black boots and red flower crowns. They carried lace tambourines that I attached flowers to. The groomsmen wore black suits, black ties, suspenders and matching sunglasses.

The most special moment for us was looking into each other’s eyes during the ceremony. We were both so ready to do this and yet didn’t want the moment to be over! We’ll remember it forever. When I look back at the day, I remember it being magical and enchanting. We had planned to travel to Tokyo for our honeymoon but that’s postponed for now.

If I had one piece of advice for other couples it would be to not stress about the weather – there’s no point! There’s nothing you can do but have a plan B.