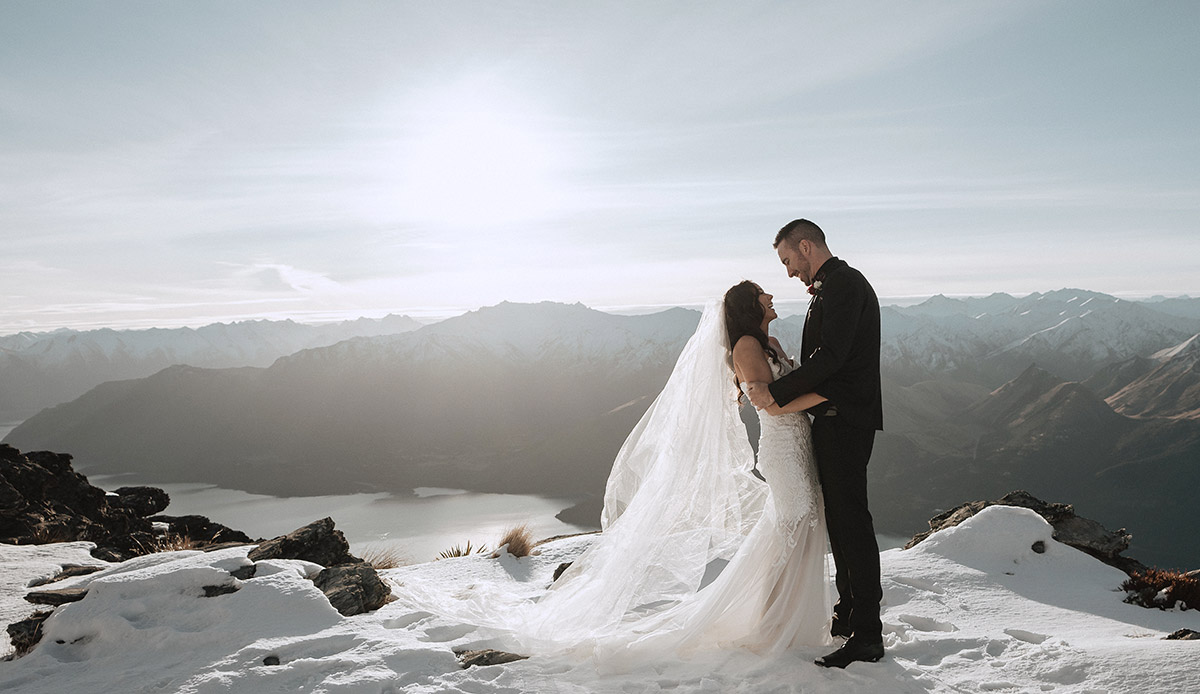 Micheal and I first met in 2010 through a mutual friend in our hometown Karratha in Western Australia. We eventually got together at the end of 2011 when we both ended up in Perth. Micheal and I lived together straight away and after a short time we both knew that we would be in each other’s lives forever. Just under five years later, Micheal proposed in Queenstown. We were snowboarding and halfway down The Remarkables! 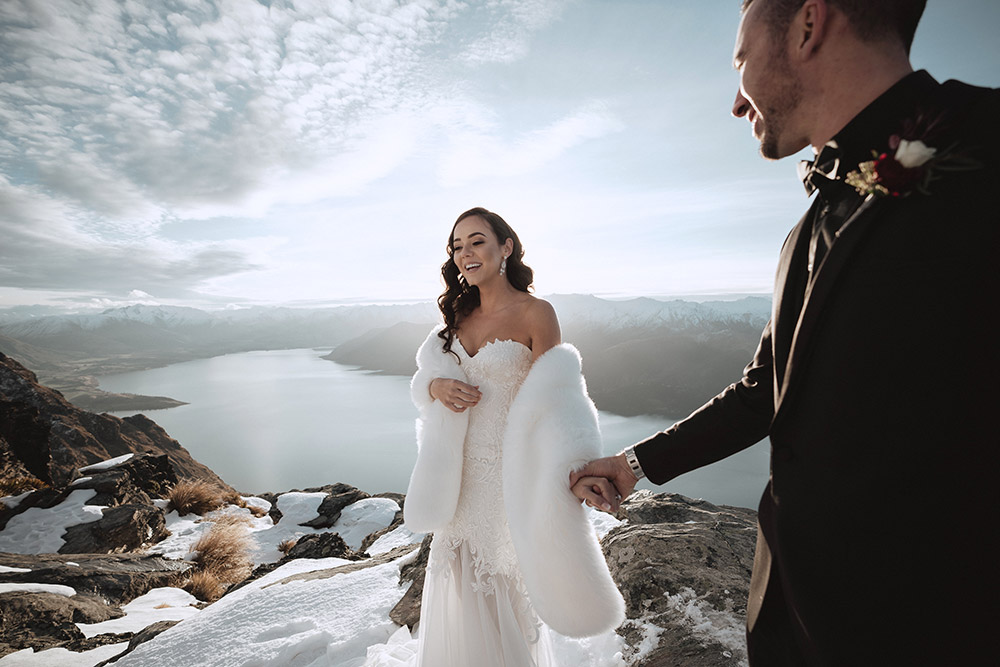 A winter wedding was something we’d always wanted, and we chose to marry in Queenstown as it’s our special place as a couple. We love it there and try to visit once a year to go snowboarding.

It’s our favourite holiday destination and held an even more special place in our hearts after we got engaged there. We wanted all of our closest friends and family to see why we love it so much.

We wanted our wedding photos to be taken up in the snowy mountains which meant our main concern for the day was the weather. It was important to have a back up plan in case it was bad. Fortunately, we were so, so lucky and had the most amazing weather. The photos on the mountain are what made our wedding! 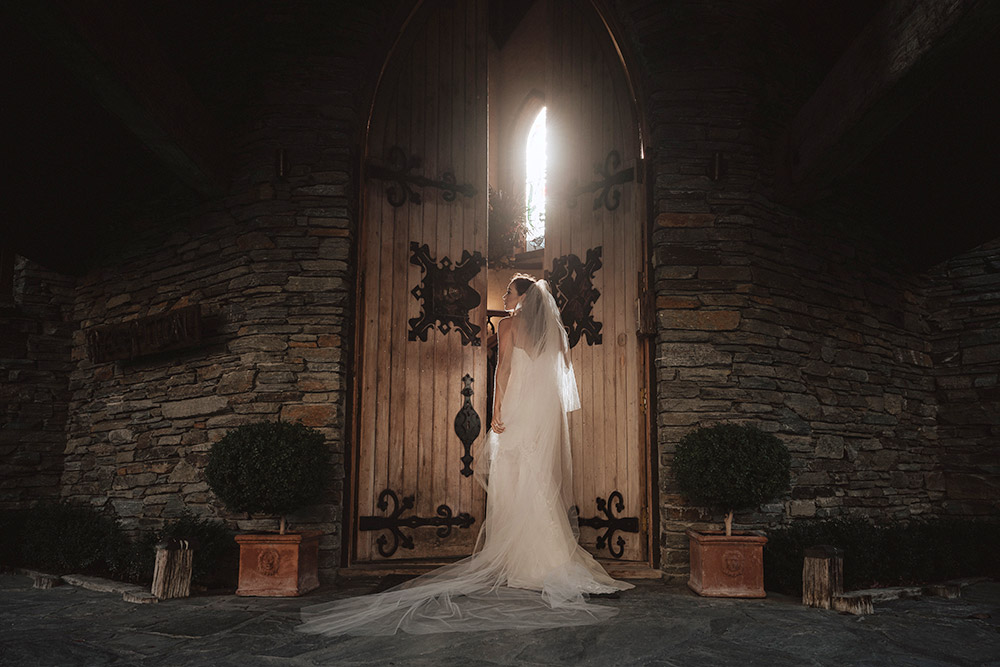 Our theme was both modern and vintage. We are very modern people, so our attire and the décor was modern, but the venue itself had a very vintage ‘Game of Thrones’ type feel to it which we also had to take into consideration. We like the look of black and white, so Micheal and the bridesmaids wore all black and the groomsmen wore black and white. 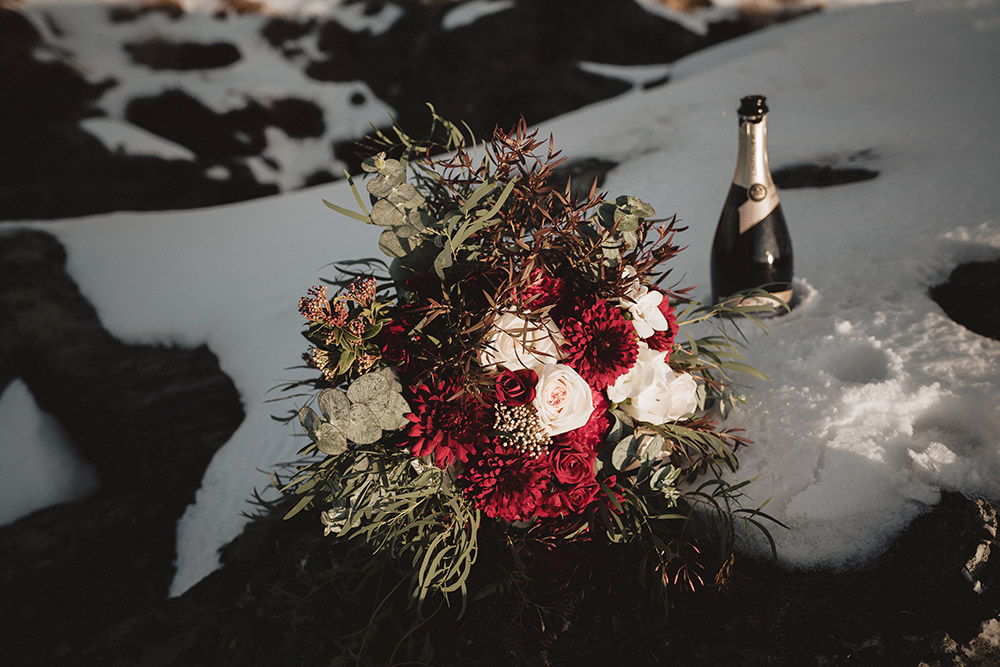 There wasn’t much colour throughout our wedding, so flowers were the main way we could bring some in. I wanted a large cascade-style bouquet with reds, deep burgundies and greenery. The floral arrangements on the archway and wine barrels were also burgundy, as was my father’s shirt!

I found my wedding dress in Perth, about a year out from the wedding. My mum and bridesmaids made me try on the dress as I didn’t want to! It was strapless, which was totally different to what I ever thought I would wear on my wedding day.

The gown was ivory with boning from under the bust down to the hips and very tightly fitted to high on the thigh where it became sheer chiffon. It had lots of details with lace and tiny handsewn sequins to add some bling. I absolutely loved it. I never thought that I would wear a veil, but again my bridesmaids and mum made me try one on! It was very long, and I chose to wear it only for the ceremony and to not cover my face. The only items of jewellery that I wore were quite big and blingy earrings in a pear shape that matched my engagement ring. I also had a white fur shawl that I wore up the mountain for our photos.

Micheal wore a full suit from Politix with everything – pants, shirt, jacket, belt, bow tie, shoes – all in black. The groomsmen wore black and white and all of the boys wore West Coast Eagles socks to show support for their AFL team! My five bridesmaids wore long black dresses in a chiffon-like fabric with an asymmetric ruffle draped over one hip. I let them pick the style together as they were all different shapes and sizes. 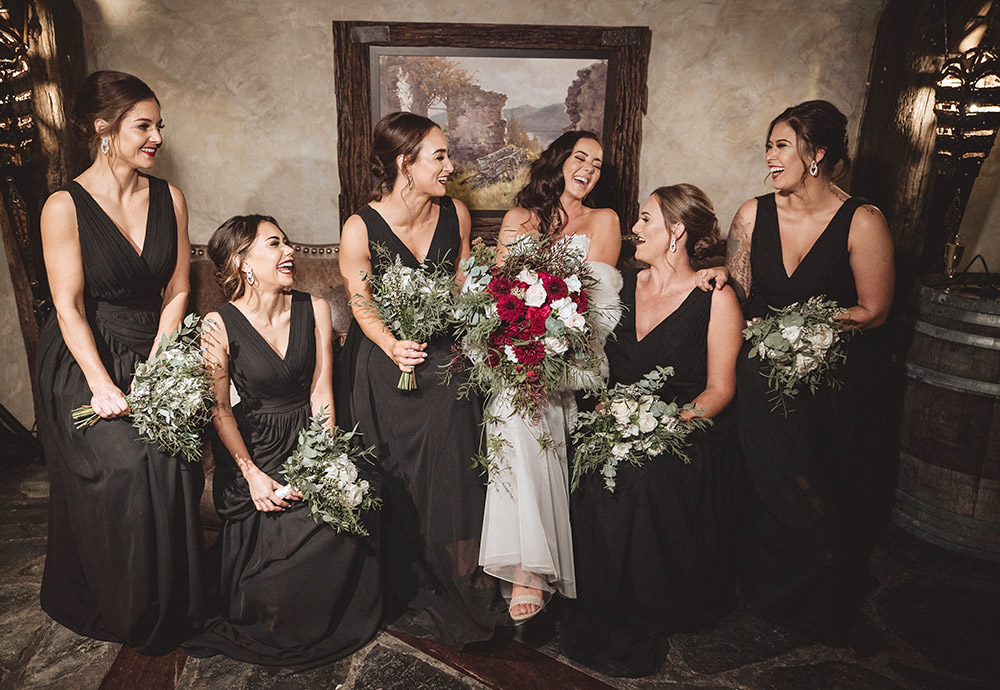 We served canapes during the pre-dinner drinks, while we were up the mountain having our photos taken. At the reception we had a three-course sit down meal. The entrée was beef cheek with carrot and orange and there was an option of pork belly with green apple compote or blue cod with rosti and parsley salad for the main. The guests absolutely loved every dish and some of them even said it was the best food they’d had at a wedding!

Dessert was vanilla cheesecake with lemon shortbread and sour cherry compote, though we also served our cake. I narrowed it down to two cakes, and then Micheal chose his favourite. He went for the two-tier chocolate mud cake with white chocolate ganache and chocolate drip, decorated in seasonal fruit. Micheal really liked that it was different to the traditional wedding cake. 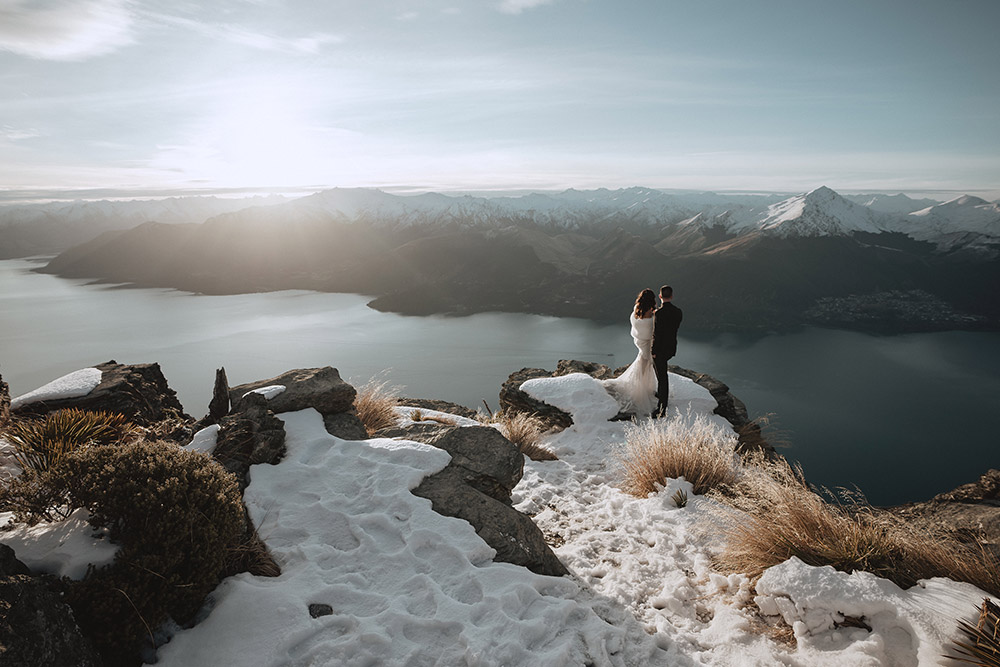 Having our photos taken on top of Cecil Peak was so memorable. Getting into the helicopter, then stepping out into snow and drinking champagne on the mountain top was such an incredible experience. The location really made an impact on our guests! Most of them had never been to Queenstown and loved it, then were in shock when they saw the venue. It was so big, and the wedding was so different to any they had been to.

Our wedding was a once in a lifetime experience and a worthy investment. It was an incredible day and we would re-live it again and again if we could!