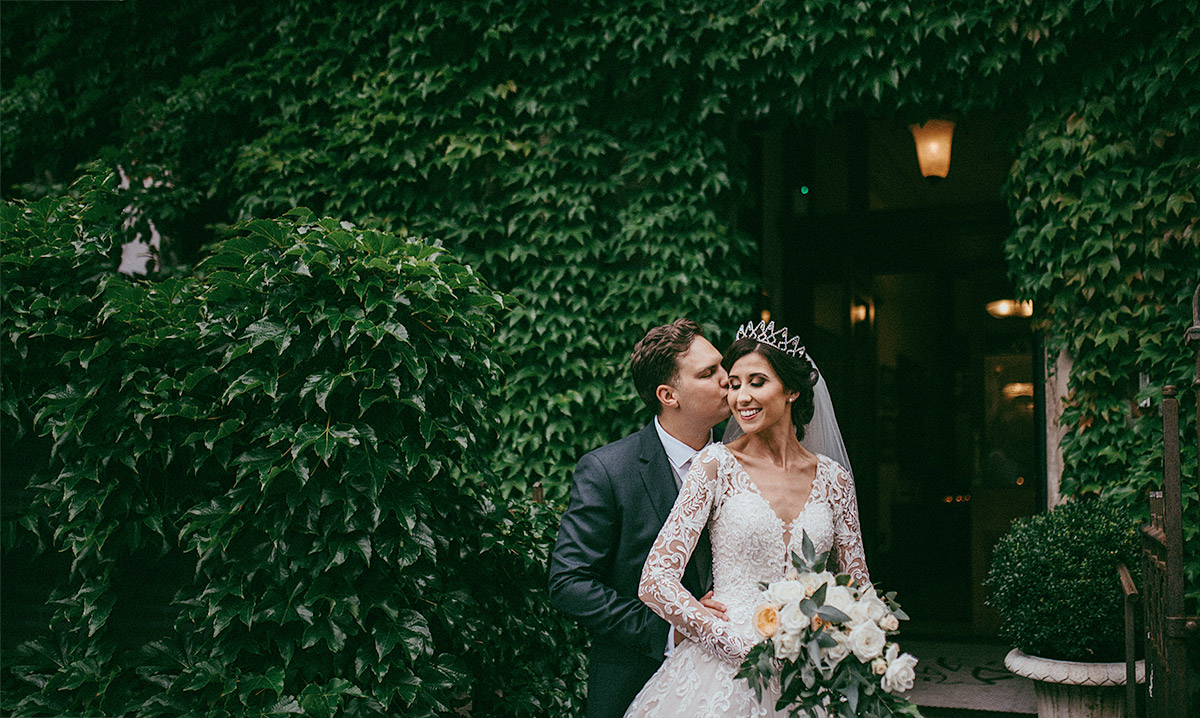 Jared and I met in 2011 on my first night out in New Zealand while I was on my OE. He was sober driving and gave me a ride home from 1885. The next few months were spent exploring the country and quickly deciding how serious we were as I was planning on leaving at the end of the year. We soon moved in together and over the next several years we travelled, bought and sold apartments, lived apart and supported each other through uni and new jobs. After seven years together, pretty much to the day we met, we were taking Jared’s family dog Willee on a walk along the beach when he got down on one knee and darling Willee kicked sand all over him! Jared said, “will you do me the honour of being my wife?” and I said yes!

We decided on an elegant and traditional English theme for our wedding. I had heard that King’s College, where Jared went to school, was very English looking inside. He wasn’t very keen on going back initially, but after looking at several venues he finally agreed to go view it with me. We knew from the moment we went through the gates that it was the place and chose the chapel for our ceremony. We were also lucky enough to have a family friend who is a member endorse us to use The Northern Club’s stunning winter garden for our reception.

My mum over in the UK was amazing the whole way through the wedding, though during one regular Skype session she confessed she was really upset about not being able to go wedding dress shopping with me. Two days later I booked a flight to the UK so we could spend seven days shopping together. It was the craziest whirlwind trip home of my life, but it was fantastic. After trying on dresses worth thousands of pounds that would take weeks or months to be made and being torn between buying one there or waiting for something better back in New Zealand, I decided that being there with my mum meant more to me than anything else.

On my second to last day I bought my dress off the rack and then packed it up in a suitcase to bring back. It didn’t have the elegant long sleeves that I had always wanted, so I had the amazing ladies at Meg’s Tailoring create me detachable sleeves and then my dress was perfect.

The princess style dress had a deep V front with beading and lots of underskirts and puff! You really have to try everything on and not rule anything out to find what works for you. It was not at all what I thought I wanted! I paired it with a cathedral length veil which I just loved and my Oma’s 57-year-old coronet which was altered slightly to make it my own. It was still very much her piece and very special as unfortunately her and my Opa weren’t able to travel from England to be with us (though they did get up at 2am to watch our wedding live stream!)

We originally wanted to get married in winter as we knew we wanted a formal wedding and thought a summer wedding would make guests uncomfortable. However, my English family said they didn’t want to travel across the world for rubbish weather (which is totally fair enough!) We were so lucky – the weather was perfect for our formal indoor wedding. It was cloudy and cooler than the days either side of it.

One of our most memorable moments of the day was driving from the church to the reception. We got 30 minutes of ‘us’ time which was just amazing. We took silly selfies which are so special and candid. Of course, being with family and friends and feeling so much love throughout the day was also very special.

We kicked off our reception with a flash mob started by my brother and his partner as guests were shown into the winter garden and starting to find their seats. Twenty of our guests dotted all over the world learnt and practiced the moves to John Legend’s ‘A Good Night’ via video message beforehand. The flash mob was coupled with our entrance and really broke the ice – it certainly gave everyone something to talk about!

We are so glad that we had a live stream of the wedding to connect with a lot of my family and friends from the UK. It was so great to know that they could feel included. Though it was stressful, we really felt a sense of belonging and coming together. Our wedding day was so amazing and filled with family and love.