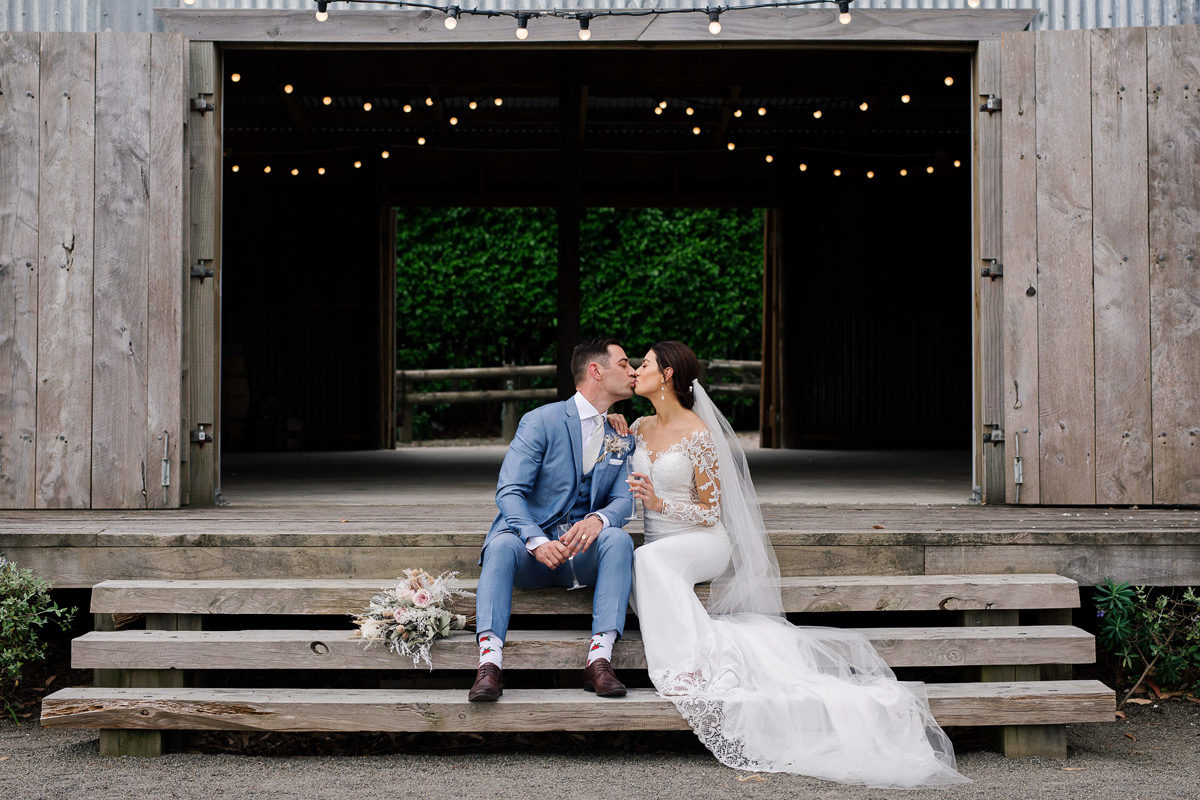 Paul (or “Paulie” as I call him) and I had been “just friends” for more than 10 years; I even babysat his daughter when he went on dates with other women. It had been a few years since we’d last seen each other, but the moment we met up, we clicked. We talked all night and finding him again felt like fate. Paulie felt the same; on that first night, he told me he’d had a dream about proposing to me on a mountain…

So when the time came, Paulie proposed to me on top of a mountain! He packed a picnic and we watched the sunset on Mount Ruapehu, the location of Paulie’s Maunga and where we spent our first New Year’s Eve as a couple. Paulie designed the engagement ring himself.

We had our wedding 18 months later, with 80 guests (we had originally invited more but had to cut back due to COVID) at Sudbury in Te Horo. We loved the rustic farm-vibe. I wanted the theme to be natural and earthy with a warm and inviting feel and the overall style to feel soft, elegant and pretty. For the flowers, I chose roses and part-dried florals.

For our meal, we chose a buffet and instead of dessert or cake, we went for a caramilk-flavoured doughnut tower, which was a massive hit! For the music, we hired our favourite local live band TOM who played at one of our first dates; we’ve been groupies ever since. We like old school music that gets all ages singing and dancing. I’m a Latin and ballroom dancer so there was a bit of hype for our first dance! Shae Mountain from Dancing with the Stars helped to choreograph. Our weekly rehearsals at home were the best fun.

I chose my dress from Pinterest and sourced it in Sydney. I loved the embroidered macrame  lace on the arms. I wanted a classic style rather than sexy. It was a fit and flare ivory gown with a mermaid line in tulle and a deep V-feature on the back. I also chose a long veil with a shimmer to it. My jewellery was by Crystal and Cord.

I had three bridesmaids and Paulie’s daughter was a junior bridesmaid. They wore nude-coloured dresses from Shona Joy in different styles. Paulie wore a tailor-made suit by Working Style in Wellington. The fabric was a mix of silk and wool, sourced from Italy.

The funniest moments were when Paulie’s mother, sister and daughter did a dance performance to ‘Finally’ by Cece Peniston – it was very entertaining! Also, when Paulie toasted his suit for being more expensive than my dress!

My highlight was when Paulie saw me in my dress for the first time. He fell to his knees. I wasn’t aware of anyone else during the vows, I was just infatuated by my husband. Paulies 10-year-old daughter did a reading that she wrote herself. It had all the guests in tears. Afterwards, we gave her a present of an engraved bracelet.

We have postponed our honeymoon until after Covid restrictions lift as we plan to go overseas.

I remember the day being full of love and raw emotion. I’m happy we saw each other before the ceremony for a first look’. It was such an intimate moment.

My advice to other couples would be that the most important part of the day is the ceremony; it’s not about having the perfect ‘Instagram wedding’ with all the attention to detail and d cor etc. Just focus on what’s important and that’s the person you’re marrying.