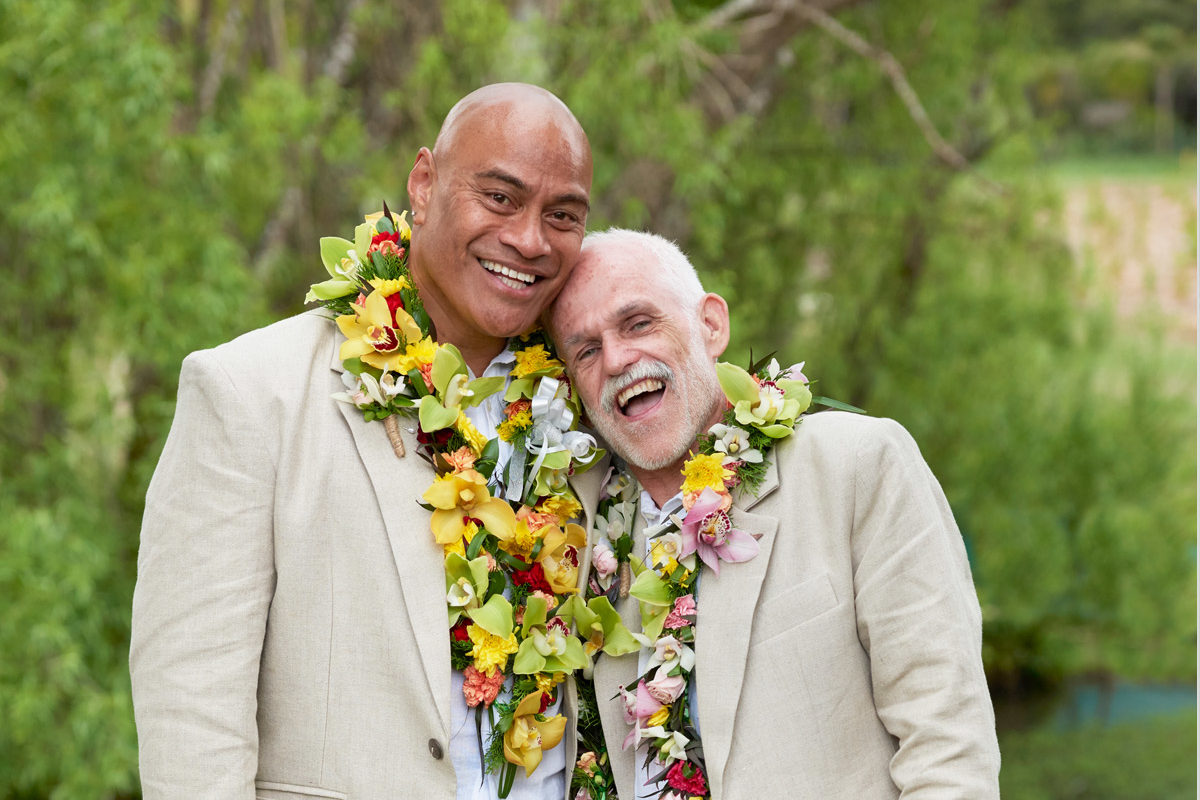 Peter and I first met in 1996 at the 40th birthday party of a mutual friend. There was an instant attraction, but he was living in Wellington, so that was that. We began dating when he moved back to Auckland in 1999. Peter and I spent a lot of time together and moved in with each other after about 10 months. We knew it was serious then. As a gay couple, it was not possible to legally marry at the time. For many gay men of our generation, it was something we never thought possible in our lifetimes. We had always just parked the idea of marriage since it was not an option for us. Same-sex couples could have a civil union from 2005 and same-sex marriages became legal in 2013. We never thought that we would enter into either until a discussion in a taxi on our way home from a beautiful wedding in 2016. It kind of went, “We have been together for so long – should we get married?” Peter was like, “Well, why not?” So we left it at that.

We had been together for more than 20 years before we got married. It was about time! It had been a rough year with my mother going to heaven in March and Covid 19 hitting people hard, so we decided that if it were possible to go ahead with our big day we would. We all needed something to celebrate and were blessed that our planned wedding could go ahead. There were 80 guests in total – 65 adults and 15 children. We had to make the tough decision to keep the guest list to immediate family and close friends only to keep it simple. It was bittersweet since we also had family in Australia who were unable to attend due to travel restrictions.

When we were looking for a wedding venue we checked out Flaxmere House in Waitakere, Auckland where a colleague of mine had performed a drag show for a birthday event. We knew instantly that it was where we wanted to have our wedding. It has great surroundings and a wonderful peacefulness to it – we felt right at home as it was so warm and inviting. Our wedding theming was tropical and relaxed which reflects the way we are and how our family and friends know us. Peter and I love how joyous and celebratory bright tropical colours and florals are and would have gone for them at any time of year! The tropical hibiscus theme ran throughout the invitations, welcome sign, menus, cake, table settings and leis. The décor was simple with a touch of elegance and really brought everything together on the day.

To reflect my heritage we both wore a traditional Samoan formal look consisting of an ie faitaga (formal lavalava) with a suit jacket custom made by Billi’s Fashions in Ōtahuhu. We opted for natural-coloured Irish linen as a nod to Peter’s ancestry. The suits were fresh and crisp and a good match for the surroundings. We also each wore a small fish brooch which had belonged to Peter’s late brother Nicholas so that we could have him there with us. His wife Barbarella was our celebrant – it was so special to have her marry us.

After saying our vows we exchanged both rings and floral leis as a symbol of our love. As males getting married, we did not want to be holding bouquets of flowers, so the leis were a perfect visual manifestation of love and the commitment we were making. They were made by Clara-Belle from Say It with Flowers who specialises in real flower leis. She used a mixture of orchids in tropical colours with greenery. Our suits were a neutral colour, so having the contrast of the bright florals really gave our outfits life. Against the background of the greenery of the valley and the venue it was just like magic! The floral arrangements on the tables were created by the Flaxmere House wedding planner Vanessa Kerridge and were just brilliant.

Throughout the day we took everyone on a journey through our music choices with some of our favourite live performers, while a drag show featuring Chanel D’Vinci was a great way to get everyone into the party mood later on. The slow-cooked smoked meats are a Flaxmere House specialty and was a total standout from the menu at the reception. Peter and I had a joyful weekend of celebration to remember with family and friends! Overall the actual act of getting married – saying our vows in front of those that we love most in the world – was absolutely the most memorable moment of our wedding day. We would have never in a million years thought that we as gay men, could ever be married – and yet here we are. Time has a way of revealing possibilities beyond our wildest dreams.