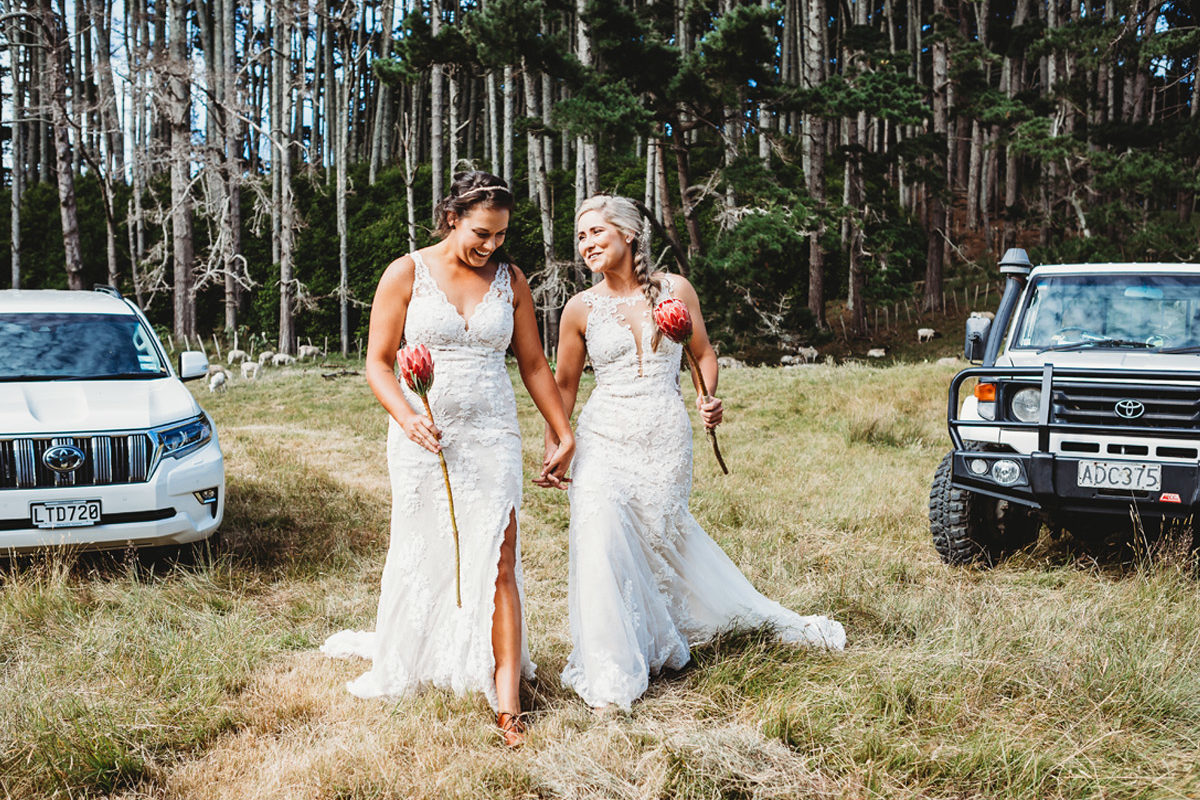 Rohanca and I both still lived in South Africa when we met through mutual friends in 2014. At the time Ro was working on cruise ships and only coming home every six months for a month or two. We knew right from the start that there was something brewing and tried to spend as much time together as possible, but it was hard. We officially started dating in January 2015 and kept the flame going, though it remained difficult with Ro’s long stints away at a time. We were lucky when one of my personal training clients bought me flight tickets so that I could join Ro on a cruise from India to the UAE. It was 11 days of absolute magic and we knew – this is it. We were each other’s person. In 2016 I received a job offer in Christchurch, so I packed my bags and moved to New Zealand. Ro joined me in March 2017.

On a long weekend in October 2018, we were driving a friend’s car down to Christchurch from Auckland. I organised friends to help me book a glamping tent in Akaroa. We arrived in Christchurch on the Sunday and our friends told Ro that they wanted to go away and had booked for us as well when they heard we were coming. She was so excited about the night away. We drove to Akaroa Wharf for sunset where we had a sundowner. As the sun was setting over the mountains I went down on one knee and asked her if we could spend the rest of our lives together.

Just over two years later we tied the knot in front of 44 guests in a New Year’s Eve ceremony at a friend’s farm between Kumeu and Helensville in the Auckland region. We had decided on the date only two weeks earlier! As one of many couples who had to postpone our April 2020 wedding due to the worldwide pandemic, we did not have another wedding date in mind. Standing on our friend’s farm overlooking the beautiful views one Sunday, he convinced us then and there to have it on December 31st.

Both of us come from a farming background which made the location extra special. It helped us feel closer to our families in South Africa who could not join us due to travel restrictions. We chose to have our wedding in summer as it is a season that both of us love with its warm weather and the ability to spend time with our friends around a campfire. Our wedding theme was rustic and simple. Ro and I built everything ourselves with the help of friends, including signage made from pallets that we painted ourselves. We arranged our own flowers and used proteas which were hard to find because their time is typically from April to November. They are not only my favourite flower but the national flower of South Africa.

Rohanca and I went to Wilkins Bridal in Christchurch to choose our gowns on different days, so we did not know what the other was wearing until the wedding. We were so intrigued to know what the other chose. At my dress fitting, the dresses that my friend and I chose for me did not quite hit the spot, but when I tried on a dress chosen by the shop assistant April, I completely fell in love. It was literally that moment that you normally see in movies – I instantly knew it was the one! I paired my Essense of Australia dress with protea earrings from Something from Home.

Rohanca started dress hunting quite late. While trying on dresses she saw a beautiful Stella York dress hanging to the side. It was the wrong size and the wrong colour, but when she tried it on she knew it was going to be her dress. Little did she know that the reason that she had not been given the dress as an option was because it was my second choice! She was so in love with the dress when it arrived in her size and colour, having it altered to make it even more her. Both of us felt so beautiful in the gowns that we chose!

Before the wedding started we had a friend pray for us as we held hands at a corner of the hallway so that we did not see each other. The day went by so fast, but the first time I saw Ro was magical! The wedding ceremony was so memorable, and we loved dancing the night away into 2021. Our wedding was special, magical, and filled with love. It was the best day of our lives.