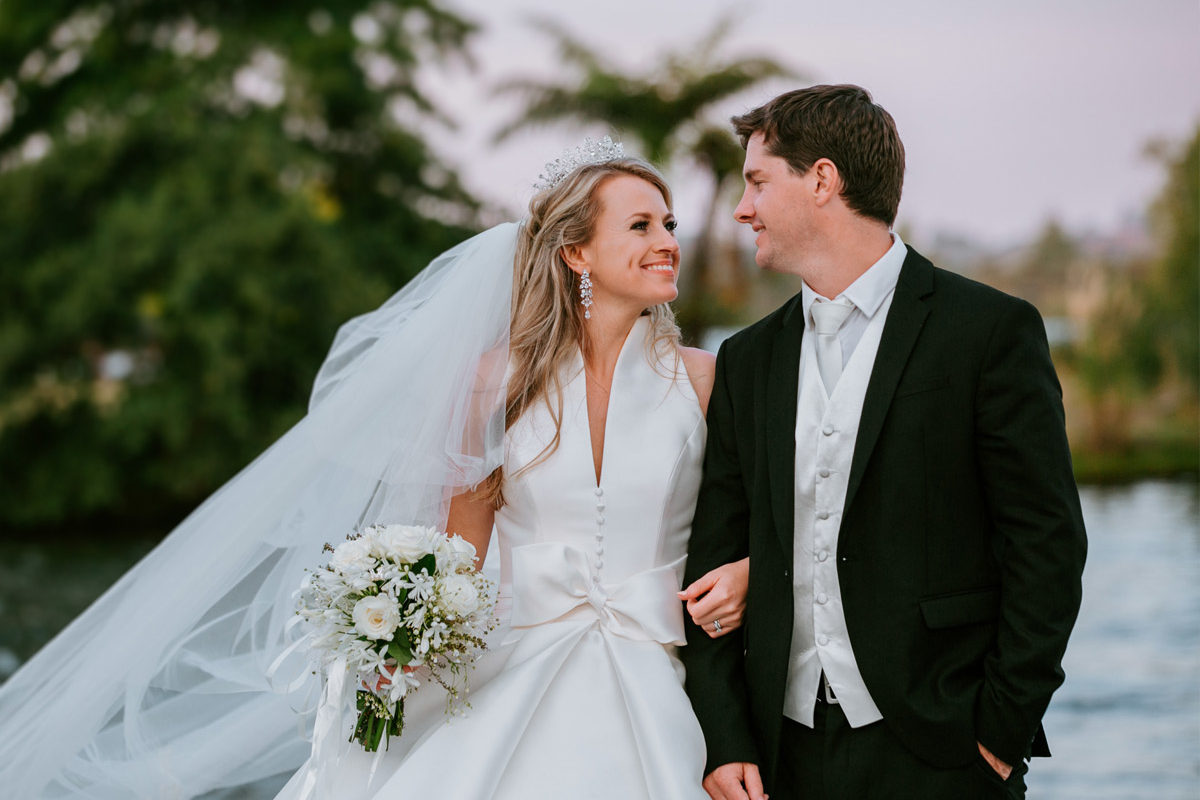 Anton and I met in the second year of uni at The Royal Agricultural University in England in 2011. Anton was studying agriculture and I was doing business management. After graduating in 2013 we moved to Germany together and that’s where we still live now. We had friends in common back then but I didn’t know him that well until he left to go away farming for the summer months and came back with long hair, a tan and muscles! There was no escaping me then!

Anton proposed on April 17, 2019 in a helicopter as we flew over the Victoria Falls in Zimbabwe in Africa. It was a spectacular surprise! We stayed in an African Resort with elephants in the garden. We married eight months later in New Zealand with 95 guests, more than 80 of them flying in from Australia, England, Germany, the US, Zimbabwe, Malawi and the south island. We were so relieved that we held our wedding before Covid hit but unfortunately, the pandemic scuppered our honeymoon plans to travel to The Maldives.

We found our venue online. We had never visited VR Lake Resort in Rotorua before, we were thrilled with it! It was perfect. The scenery was beautiful, with a lake and a cruise option plus accommodation for all our guests for three days.

We called our wedding the KiwiZimWedding. I’m Kiwi and Anton is Zimbabwean. It was really special for us to have a South African Reverend as the celebrant. I planned my own wedding, a three-day event from January 10-12, 2020. Our guests joined us for the rehearsal dinner at Mita Maori Village, a Maori performance evening in Rotorua. We organized a cruise across Lake Rotoiti the next morning. Everyone ate lunch on the boat and went swimming and then to the hot springs afterwards. It was a real summer wedding, mostly outdoors.

I wanted the day to feel traditional but classy with a modern twist so I chose a white theme. My mother created the flower arrangements, using roses, carnations, gypsophila and agapanthus from my parents’ garden in Katikati. Everything was white, from the groomsmen’s waistcoats, my dress and my bridesmaid’s dress to our bouquets, the cake and the table decorations. My standout memory of the photoshoot was standing on the boat dock as the sun went down. Another was when my veil was taken up in a breeze by the lake, just in time to capture the perfect shot.

The ceremony was formal. We had a live cellist, a keyboard player and a Maori soprano soloist sing Po Kari Kari Ana and other Maori songs. We threw an African dance party that night and a DJ played our mix of old school classics and pop music. The most memorable moment for me was when we danced into the reception to the Circle of Life from The Lion King while everyone clapped.

My parents came to Germany and paid to get my bridal dress made. I wanted a modern dress with a traditional feel so I chose a large, princess style dress in slub, satin material with a five-meter veil. For the rehearsal dinner, I wore a large New Zealand-inspired black dress with a fern brooch. On the third day, I wore a white, fitted dress with a hat that said KiwiZimWedding.

I had one bridesmaid, Hayley. My friend Emma played the cello. We all went to boarding school in Dunedin. They wore ivory dresses to match my dress and the groomsmen’s waistcoats. Anton and his groomsmen wore black suits from Zara.

My wedding day was more than I could have ever imagined. In the words of my husband’s speech, we look forward to “love, laughter and happy ever after”.