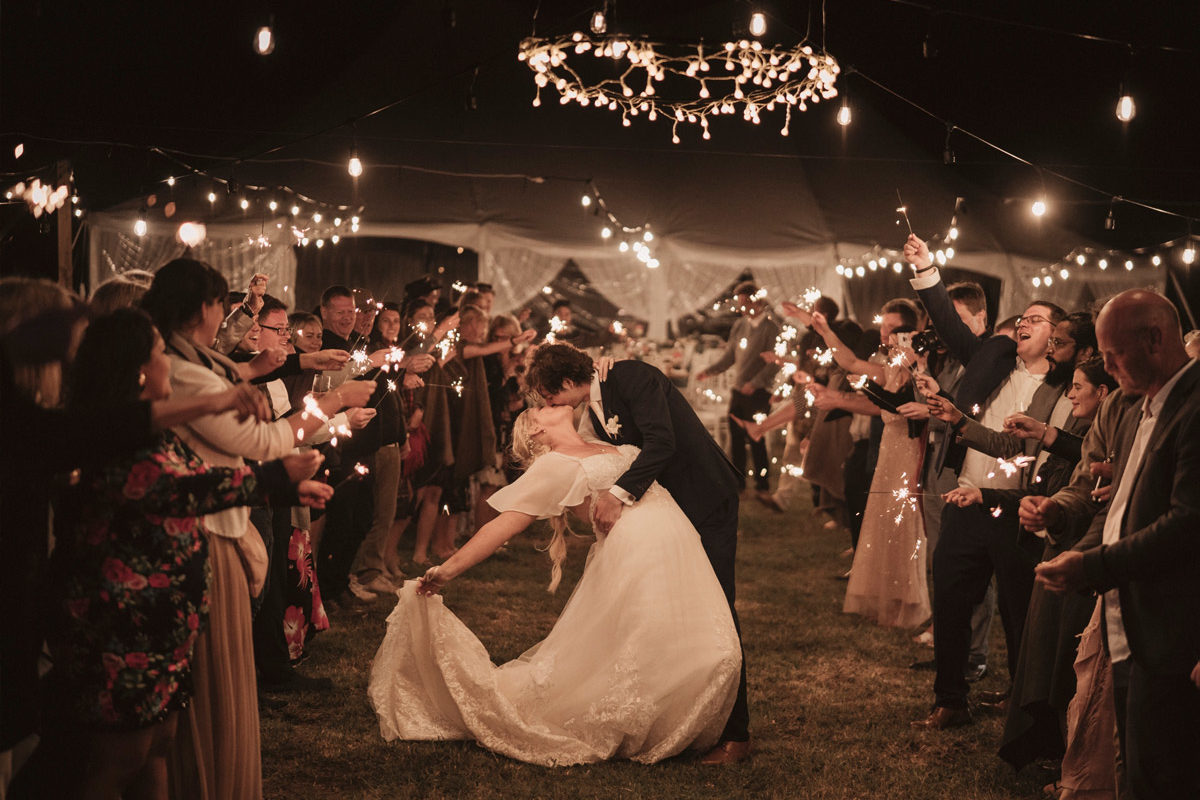 I moved to England and was pushed by friends to put myself “out there”. I went online for a laugh. One month later, I found Sam. It was instant. Two months later, he asked to meet me on my birthday. I had already fallen in love with him! We had our first kiss that night. Sam said he knew after kissing me that I was “the one”.

The following year (2017) I took Sam to meet my family in New Zealand, his first time to visit there. Sam proposed one year later in Rome, at the highest level of the Colosseum. I cried and laughed; I was so overwhelmed and happy. He had been carrying the ring in his pocket for three days in Rome, waiting for ‘the moment’.

I wanted a boho, woodland, fairytale ceremony in the woods and the rest of the wedding to be elegant and romantic with a picnic. I found the perfect spot on my parent’s farm! It was entirely outdoors.

We used a digger to flatten the reception area ourselves and we planted grass. We built the structures. We had to organize everything ourselves: water, power, rubbish, toilets. To me, it was really special to have all our friends at our home, especially all of Sam’s family who travelled from England.

We set up a champagne mingle zone, and everyone walked up to the top of the hill for the ceremony. I made cones to hold the flower petals and rice for confetti, stored in a book of love poems that I had sealed with wax. Blessings were read out from each of our families who came up and tied ribbons around our hands during the ceremony. Those ribbons are now woven together and hang in our home.

I loved the first day of summer as our date. My mother grew most of the flowers; she’s an amazing gardener. I wanted colourful blooms that would pop. I chose roses, dahlias and gladioli, with lavender and pampas grass. My invites were floral.

The wedding was on a farm but it wasn’t a ‘farm’ wedding. We arranged an eclectic, boho mix of cushions, blankets and rugs with lots of candles and fairy lights. I chose bronze gold and blush as my colours and kept everything else warm wood or white.

We had a buffet dinner with lamb, beef brisket, pork spit roast and roast chicken. My family dived for mullet, crayfish, mussels and oysters. I made my own wedding cake: a two-tiered chocolate ganache and lemon cake with cream cheese.

My Uncle Noel made a speech about Sam. He made him take off his trousers and “get in a box”. Then he told Sam’s life story with drawings and props. He let off a firework to represent our first kiss, just missing the band stage. It was hilarious.

I had my dress made; it was flowy with draping sleeves and a low back. It had a beautiful bridal skirt and a lace overlay. For me, the silhouette is important. My big, dramatic moment was my Abbey-length drop veil. I always wanted an OTT veil! It had a scallop shape cut trimmed with lace embroidery. My two nieces were my flower girls. They carried wicker woven baskets full of flowers. I had four bridesmaids and they wore matching dresses in different styles. Sam wore a warm, navy suit by Tom Ford, with tan shoes. His boutinare was an English rose and a Kiwi fern!

The ceremony was my favourite part; it was so special and I felt so much love and happiness. Four days later, we flew to Samoa for our honeymoon.

My advice would be to plan as meticulously as you can and then on the day, let it go. If you’re married to the person you love at the end of it all, then it was a success!