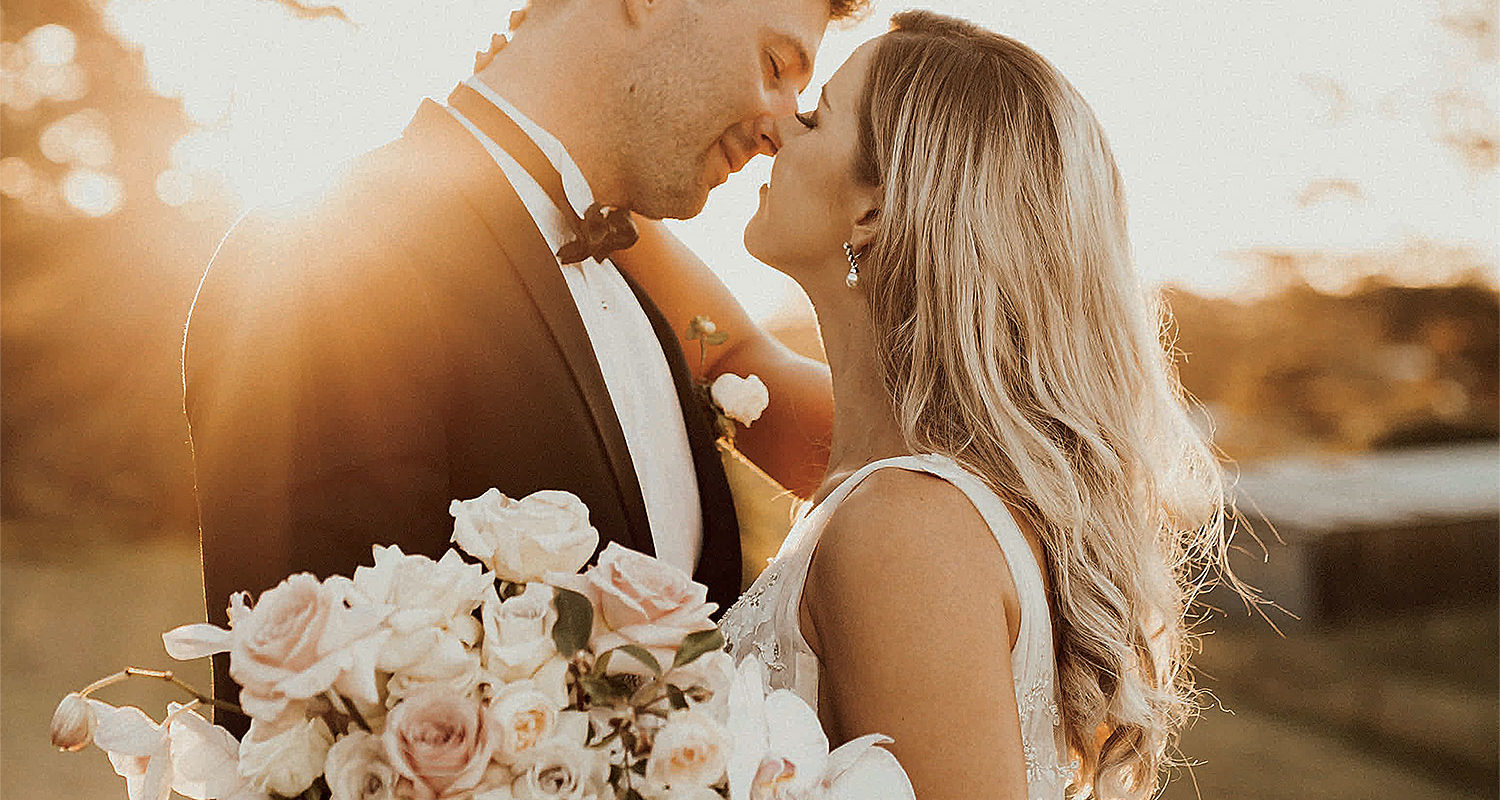 In early 2012 I had just moved back to my hometown New Plymouth after living in Australia for six years and at 21 I was excited for the fresh change. A few months later Trent and I happened to bump into each other one night in town as we had a mutual friend. We hit it off instantly. 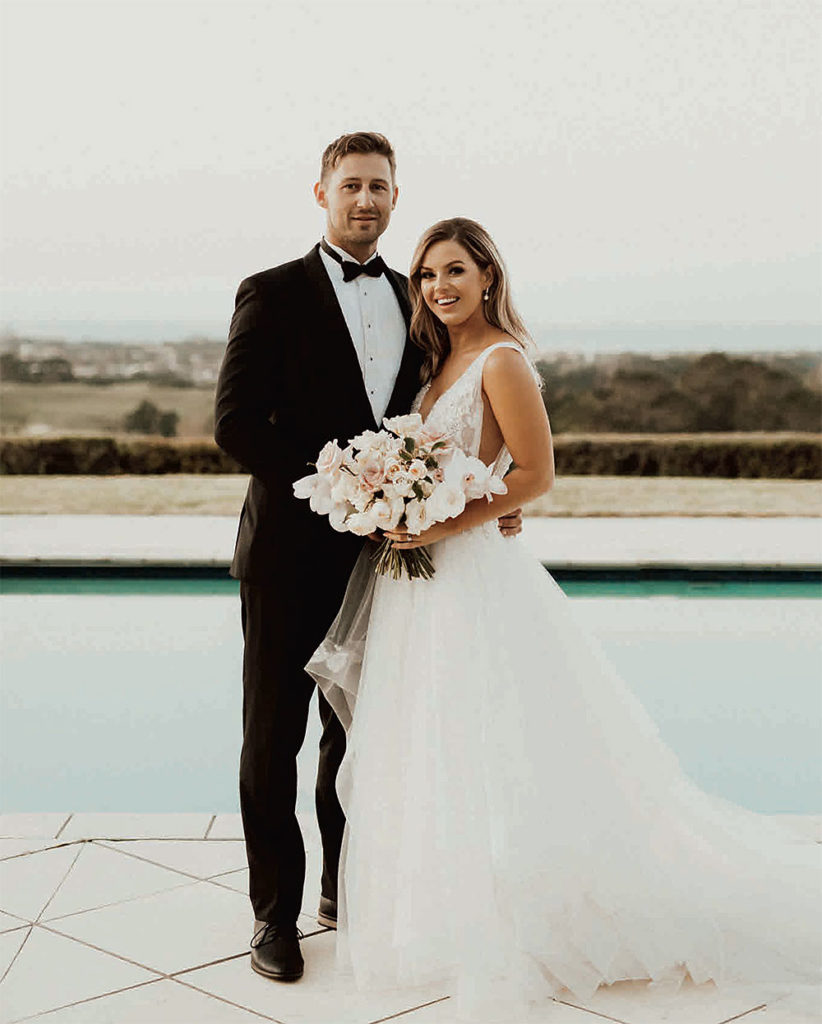 At the beginning when we were getting to know each other he would plan actual dates which was really special. For example, he planned a bike ride along the foreshore, then we got coffee and chatted for hours. He plays inline hockey, so he took me skating and when it was Guy Fawkes he set up a little dinner on top of a hill in Fitzroy that looked out over the ocean and the city where all of the fireworks were being let off. He was super thoughtful about our dates. I remember coming home after our third one and saying to my sister, “I’m going to marry this guy.” 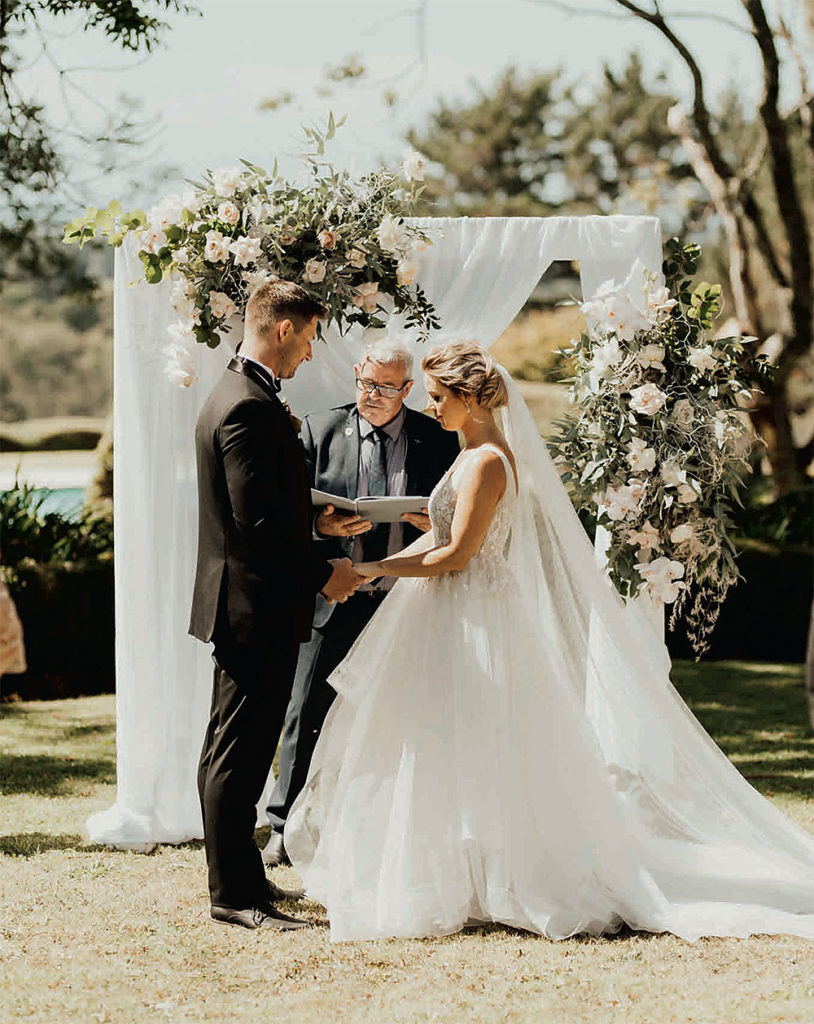 In August 2016, four years in to our relationship, we were travelling across America before a work conference I had in New York. About a week into our trip we arrived in LA and decided to go to Disneyland – I was so damn excited. After walking through the main entrance, I wanted to get a photo in front of Sleeping Beauty Castle, so I asked a family walking by if they could take a photo for us. After we took the photo and I thanked them Trent said, “Hang on just a moment”. I was looking around as he bent down to his bag and I turned back to see him down on one knee with a box in his hand. The whole time I was in complete shock and it honestly felt like an out of body experience. His words were beautiful and the way he did it was perfection – I had no idea it was coming.

Even better, the family who were taking our photo still had my camera and continued to take photos as he proposed so I was able to put the images together and create a little rolling clip of it. 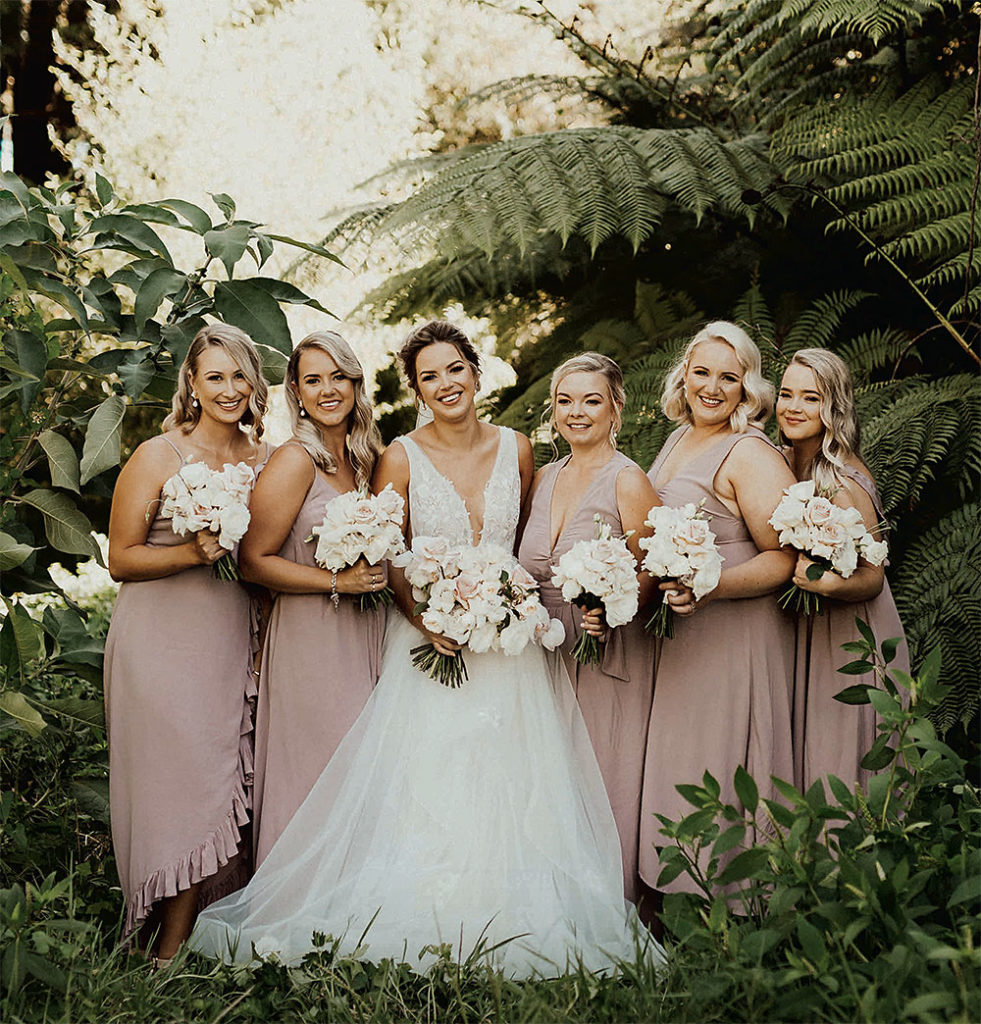 Two and a half years later we married in the Taranaki in front of 120 guests. The longer engagement was the perfect amount of time for us as we planned to build our home before then and it gave us plenty of time to really think about what we wanted and who our vendors would be. I’m a makeup artist by trade and work on weddings all year round, so for almost five years I’d been studying the best time of year for reliable outdoor wedding weather. For that reason, we chose the beginning of March when it was our turn to walk down the aisle.

We held our ceremony and reception at Barton Estate. I had attended my cousin’s wedding there seven years prior and fell in love with the place – I had wanted to get married there ever since. It’s beautiful and has separate areas for the welcome, ceremony, cocktails and reception. It’s a big beautiful home with a well-established English-style garden. The venue size was perfect – not too big, nor too small – and the views of New Plymouth City and the ocean are stunning on a beautiful summer’s day. 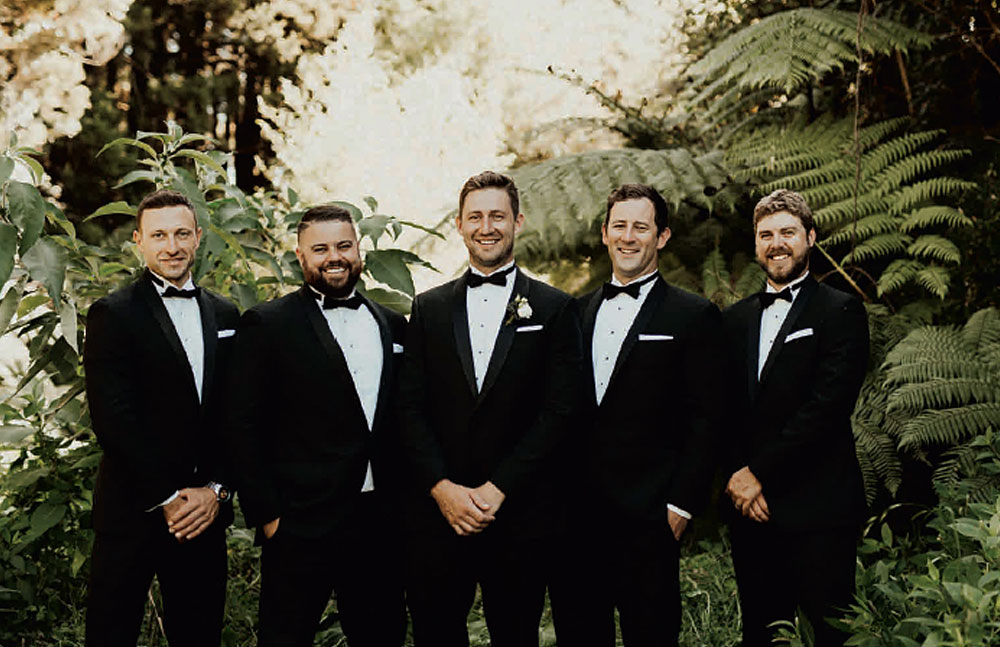 I’ve always wanted a classic romantic style wedding with lots of white. We had a mix of modern and vintage for a timeless feel with roses, bowties and cocktails. Our flower arrangements were made up of mainly roses, mostly in white along with some gentle pinks. I think roses are the flower of timeless love. Everything we chose to have as part of the day were things we liked or that spoke to us as a couple. It was super important to me to feel a certain way in a dress. I always thought my gown would have long sleeves, so I tried sleeved styles first and found it would swallow up my body so much – it really threw me! After that I thought about the areas I like to show off and things I like to cover which made it easier to select dresses that made me feel comfortable and beautiful. 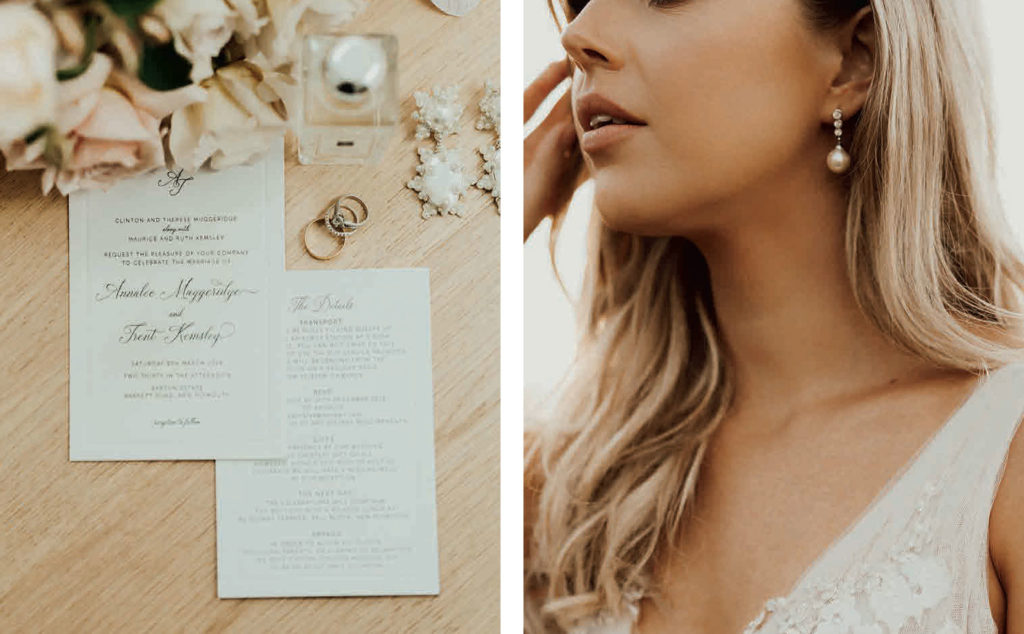 I eventually chose a lace and tulle princess gown with a chapel length train by Zavana Bridal from Jessica Bridal. I loved the beading and the plunging neckline. My two and a half metre veil was made by Liah Roebick Bridal, a close friend of mine. 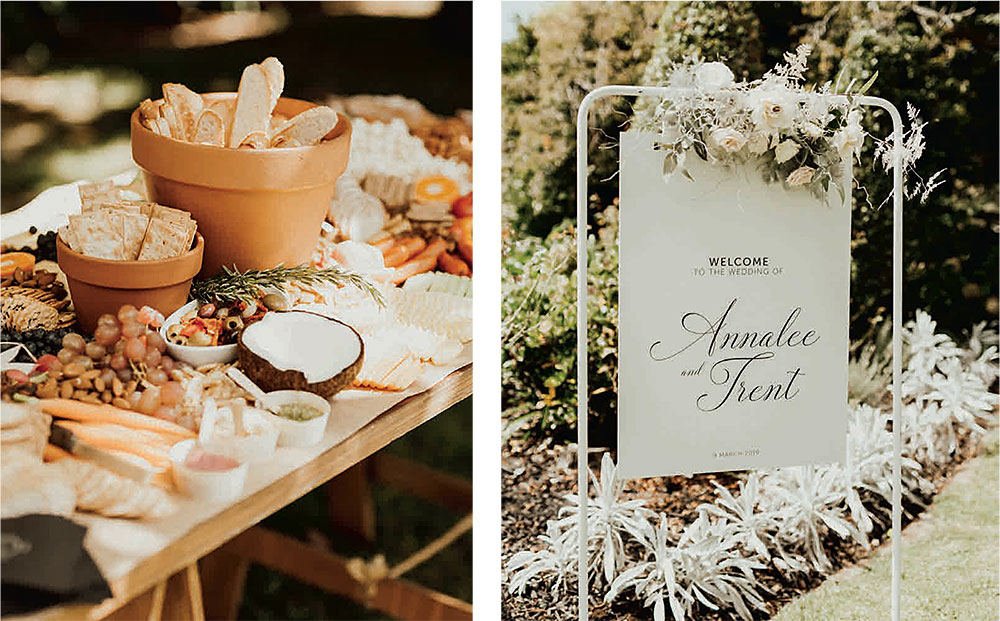 We chose to have a family style spread for our reception – sit, serve, share. Dishes included garlic and herb BBQ lamb with minted kumara, smoked salmon with crispy capers and baby potatoes, BBQ tamarind chicken thighs with rice noodles and a blue cheese and pear roquette salad. We decided on a range of tartelettes for dessert in multiple flavours including banoffee, cheesecake and lemon curd. Our guests raved about our cake – two tiers of banana and caramel made by Aimee Jayne. Trent and I loved the flavour when we taste tested it but didn’t get to have any on the day as it went so quickly! 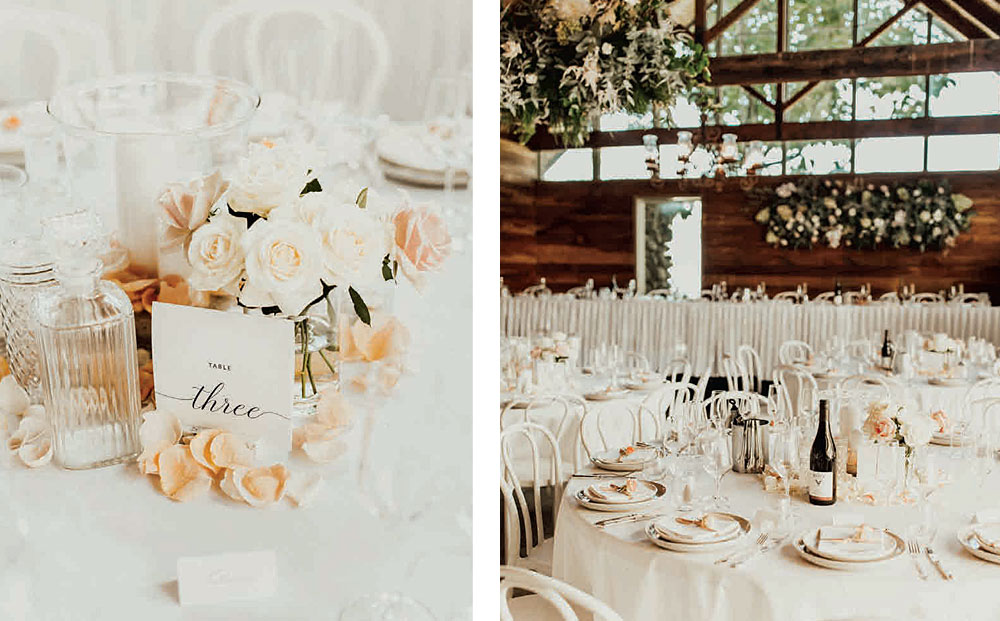 I’m so glad that we picked all of the vendors that we did – most of them are good friends of mine through the wedding industry and it felt like they put a lot of love into what they did for us. I’m also so glad that we had our wedding planner, Victoria. She ran everything in the background on the day so that none of us or our family had to lift a finger. I highly recommend her! Minimal stress. Walking down the aisle and locking eyes was our most memorable moment of the day – it felt so surreal. I hope our guests had a bloody good time at our wedding and felt as full of love as we did. Looking back on the day, it was just perfect. I wouldn’t change a thing.

There’s so much to plan when it comes to weddings – how on earth are you supposed to find the time to work out and be super healthy so you can fit that dream dress?

By The EditorDecember 6, 2021
Real Weddings