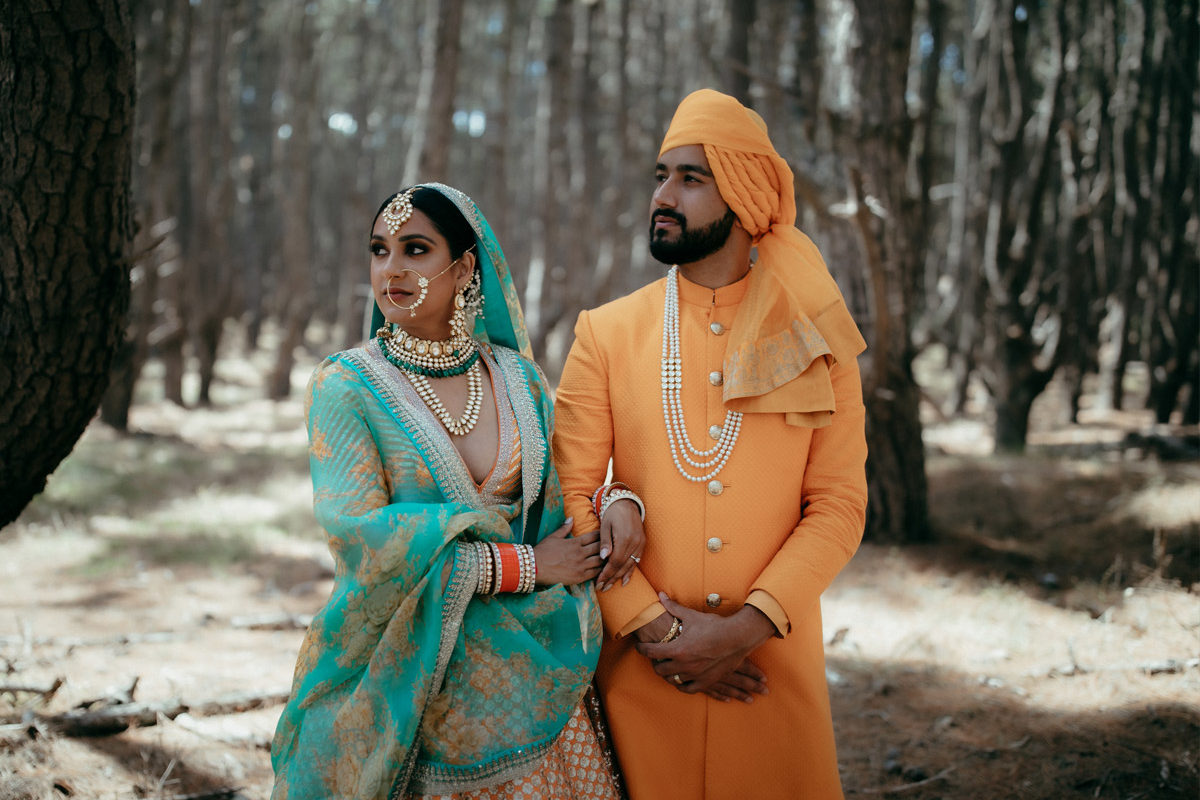 Harry and I met 11 years ago on Queen’s Street in Auckland. We were both 19 years old. It was a bit like the movie The Fast and the Furious; he was driving a white Toyota Celica and I was in a Nissan Skyline. We met at the traffic lights and followed each other around town until he pulled over and I followed. We exchanged numbers and it took off from there!

We moved in with each other one year later, which is a huge deal if your family is Indian! We matured together. About five years ago we opened our first restaurant ‘1947 Eatery’ and another soon afterwards, ‘V.T Station’. We now work together full-time.

Harry proposal was a surprise. My younger sister Isha helped him with the plans. He asked me to marry him on the rooftop in Cappadocia, Turkey with all the hot air balloons floating by in the air behind us.

Originally, we planned to marry in our family farmhouse in India but couldn’t due to Covid. Instead, we hosted the Hindu wedding at home and the Sikh wedding at a Gurdwara (Sikh temple) followed by our reception at Mudbrick on Waiheke; one of our favourite places. For our events at home, including the Hindu wedding, we hired a large clear marquee with white outdoor furniture plus a small marquee for the bar.

Guest numbers ranged from 120-180 people on different days. For our reception at Mudbrick, we had 85 guests. We’re known to be great hosts; everything we did was to create a fun celebration for everyone to enjoy, from the flowers to the food to the bar. As I knew we would all be wearing colourful Indian outfits, I opted for a simple, elegant theme for the flowers; white blooms with green vines.

At home, we served a huge grazing platter and a buffet, with fresh bread and meat from the charcoal oven. The food was traditional Indian street food from our restaurant, such as Pav Bhaji with toasted butter buns, as well as delicious Indian sweets. At Mudbrick, cocktails were followed by a three-course meal and wedding cake for dessert.

My favourite memories were from the photoshoot at the first wedding, just outside our property. We were a little tipsy and the photos were hilarious. The second memory was rushing to Albany, trying not to miss our helicopter ride to Waiheke. I think there were some road rules broken to get there!

We hired a DJ who played a mix of Indian and English music. We had multiple performances, including Harry’s parents, my parents and our friends who did a full six-minute dance routine about our lives and how we met. We also had a performance by two special guests who were professional Bollywood dancers. The first event (of four) was a ladies Henna/Mendhi evening. We bought over 30 floral robes from an online boutique called bride-to-be so that all the girls could wear one. The second day was Jago and Sangeet; we wore traditional yellow and green outfits. Day three was a traditional Maharashtrian wedding in green, pink and yellow. My second wedding outfit was from Sabyasachi (India’s Vera Wang) in orange: an unusual colour for a bride. It weighed 10kgs and I wore it with a turquoise green dupatta (head shawl).

I choose the outfits according to each event and accessorized with Indian jewellery. They were all made from pure raw silk, ranging from traditional to modern embroidery. We didn’t have bridesmaids or groomsmen; our family and friends all dressed in traditional Indian outfits. The same Mumbai designer made Harry’s Maharashtrian white and cream outfit with a green turban. As with all Indian weddings, many little rituals were involved, including swapping gifts before getting married; it’s called the shagun.

I’m glad we hosted most of the event at our home as we could relax and enjoy it. They were the best days ever! We travelled to Lindis in the south island for our honeymoon.

My advice to other brides would be to plan everything around what will be the easiest and most enjoyable for you both. We planned our whole wedding in six weeks. It’s important to let your family know what you really want from your special day. I told both sets of parents that we wanted to have fun and avoid too many formalities so that if something didn’t go exactly to plan, it was OK! Relax, enjoy everything and wear comfortable shoes; I wore three-inch sneakers under my long Indian dress!