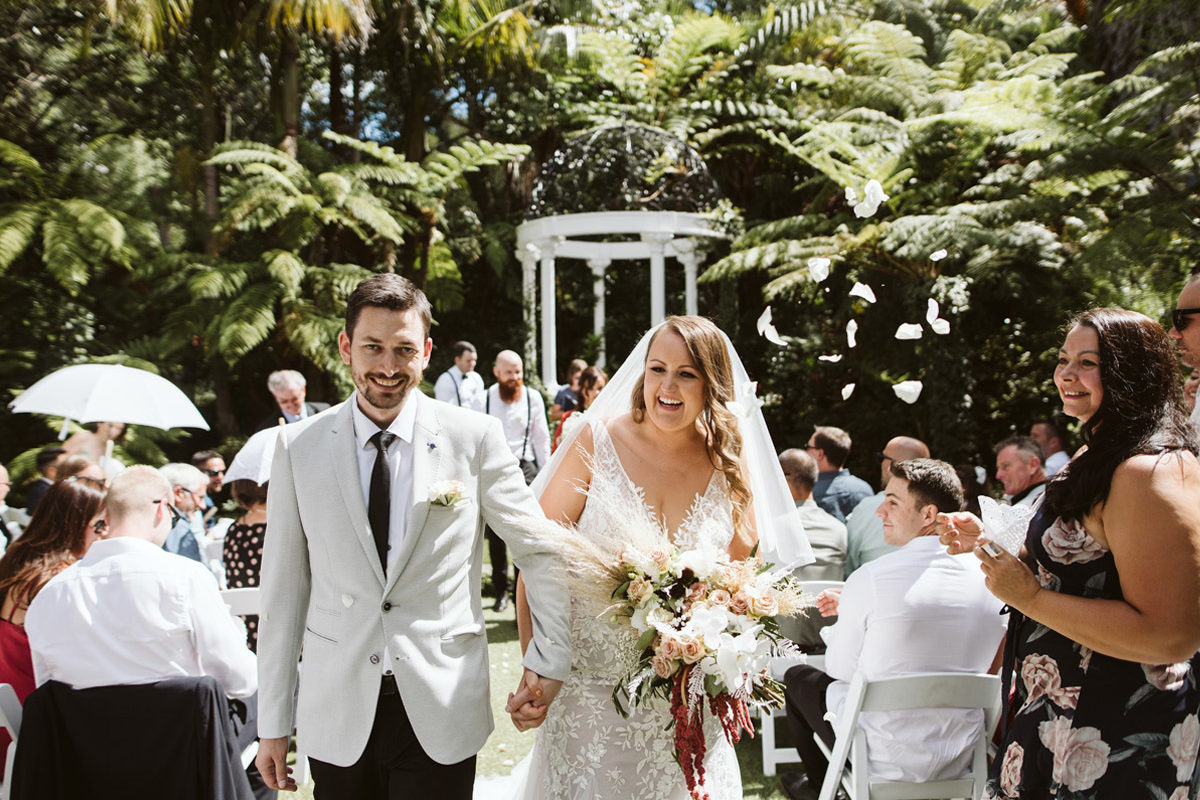 James and I met in mid-2018 at the Lumsden in Newmarket. We were set up on a blind date by one of my best friends – James’ boss at the time. She thought James and I would get along, so gave him my number at the start of the year and it took him six months to contact me! When we met I could not help but think what a nice guy he was, and our relationship progressed really quickly. We had been together for two months when an opportunity for James to move to Wellington for work came up. Four months into our relationship we had left our family and friends behind in Auckland, moved to a new city, changed jobs, and started living together. We both knew pretty quickly that we had found ‘the one’.

James told me at the start of 2019 that he would propose to me at some point that year. We had moved back to Auckland midyear and on a road trip over the Christmas period we ended up in Wellington to catch up with friends. James still had not proposed. We were watching the New Year’s Eve fireworks at Oriental Bay and I was trying to wrap James up in a blanket because he was shaking, though he was adamant he was not cold. After ringing the new year in, I thought we were about to leave and turned around to find James on one knee. When he finally asked me to marry him, I said, “of course” and bawled my eyes out. He had been shaking so much as he was nervous – not cold!

I knew I wanted to get married in a garden setting and looked at the Tui Hills website after seeing an ad on Instagram. We booked an appointment to see the Swanson, Auckland venue later that week. Once there I got goosebumps – it was so beautiful and everything I wanted. We loved it so much that we booked it the following day! The whole aesthetic is beautiful. We aimed for a romantic theme with a pretty neutral colour palette so that everything went well together. The venue was everything I could have asked for. We have received so many compliments on our wedding from guests, saying how beautiful the venue was, how delicious the food was and how attentive the staff were – they were beyond amazing. It was really important to me that our guests had a great time and were looked after – Tui Hills was perfect!

I originally intended to have my gown custom made, and I was told to go begin by going to another bridal shop to try on different shapes so that I could get a feel for what I did and did not like. I ended up going to Jessica Bridal where I found my dress! I was open to any style as long as it had straps as I did not want to be pulling my dress up all night. The ivory Miss Chloé fit and flare dress was embellished with lace detailing and had a bit of sparkle. I called it my ‘waterfall mermaid’ dress as it had a long chapel train made of beautiful tulle. It was actually just a dream. I decided to go for a blusher veil as I was petrified to walk down the aisle with people looking at me! I wanted one that covered my face. Our photographer was really excited when he saw it as they are not that common anymore.

My mum passed away 10 years ago, and I really wanted to feel like she was there on the day. I had a brooch made with her photo in it – wearing a blue top that brought out her sparkly blue eyes, she was my ‘something blue’. The brooch was attached to my bouquet with a piece of ribbon in mum’s much loved leopard print, so that mum was also ‘walking me down the aisle’. It was so special. Our wedding was so perfect, and I would not change a thing about it – it was everything I could have hoped for and more. I hope that everyone had a good time eating delicious food, having a dance, and just celebrating with us! Judging from the feedback I have had; my dreams came true! Our guests have also commented that we were so ‘approachable’ during our wedding – guests came up to the bridal table to chat and we made sure to go around and talk to everyone. Our wedding day was romantic and just completely ‘us’.