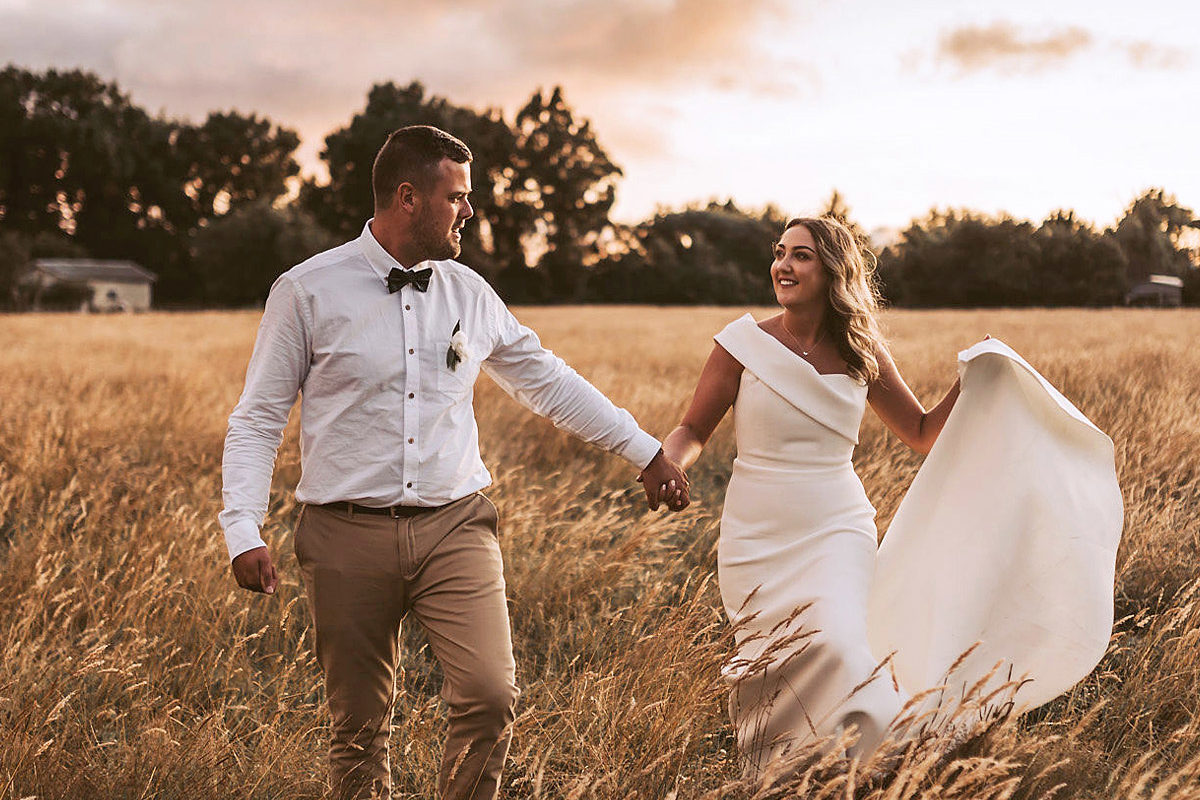 Robert and I met in 2011 when we worked together at McDonald’s. He was my manager and we didn’t like each other at first! We eventually realised we had such similar values; we both liked to have fun but were family people at heart. We’re actually the fourth couple to get married out of our group of friends that met at McDonald’s! Rob proposed to me in Fiji in May 2018.

I fell in love with our photographer on Instagram and saw that he had photographed a wedding at Orlando Country. I thought it was in Orlando, Florida – I had no idea it was in Palmerston North! It’s where my family comes from, so I was shocked that I had never heard of the venue before! It was a beautiful location, large enough for all of our guests and we really liked the wooden building and style of the venue. Rob plays golf, so he especially liked that our guests could entertain themselves with the driving range while they were outside having drinks.

The anniversary of the beginning of our relationship is in January, so I thought it would be nice to get married in the same month so we could celebrate it being special to us. I love greenery, and I was glad that I could bring that into the colour palette. We kept our floral arrangements simple with white flowers and lots of greenery tying in with the flower wall we hired and our venue.

I designed a lot of the wedding myself and wanted everything to be consistent and follow the same theme – modern, simple and elegant. We made a wall of champagne lollipops as wedding favours and Rob made all of the signage – he works at Bunnings Warehouse, so it was obviously his most important job! I definitely changed my mind on how I wanted things as trends changed, but I kept everything relatively simple and timeless which helped.

I wanted to be fashionable, but also classy and elegant in my gown and originally liked really lacey and summery boho gowns. I showed my grandma a photo of one option and she hated it! I was obsessed with the gown that I ended up choosing which I saw online. It was over my budget, but I had to try it on, or I’d regret it. Then I fell in love and had to have it – my mum paid for half which was amazing. It was completely different to what I thought I wanted, and I loved that about it. I was so excited to surprise everyone, and I knew everyone would love it – and they did. My dress was made from a really thick fabric, almost like a wetsuit. People said it looked like fondant! It didn’t crease much which was great, but it was super heavy and thick which I was nervous about. Luckily it ended up being an overcast day and I didn’t end up being a hot mess! I actually ordered my veil off AliExpress for $45, twice! The first custom made veil with a scattering of pearls wasn’t what I wanted, but for the price I could order another, and it was perfect! My shoes and jewellery were items I came across only a few months before the wedding.

Canapes like arancini balls, rare beef crostini, garlic prawns and sweet corn fritters with avocado were handed around while our guests were drinking on the verandah and playing golf following the ceremony. We then had a sit-down dinner of seared beef eye fillet on creamy mash with pea puree and an alternate drop dessert of chocolate torte or pavlova. Everyone loved all of the food! Lots of people said it was the best steak they’ve had which was really good to hear! Our cake from The Crafted & Co. was passed around in the evening. It was three tiers and I let Robert’s little brothers decide on the flavours as I’m not really a cake lover! The top layer was orange with white chocolate icing, the middle was white chocolate mud cake with raspberry icing and the bottom was caramel mud cake with salted caramel icing.

Seeing it all come together after months of planning was so memorable, as were the speeches and the actual ceremony. The bridal party photos were also really fun. Everyone was dancing and enjoying themselves – it wasn’t staged or anything super serious. I’m glad it wasn’t a super formal wedding. Everything was so fun, and we’re glad we invited everyone we wanted to be there – we didn’t limit ourselves with guest numbers even though that’s where most expenses come from. It was the most amazing day with all of our friends and family; everything we could have dreamed.